You are here: Products Initiated into the Team (Team Spirit #1) by Cassidy Wilde 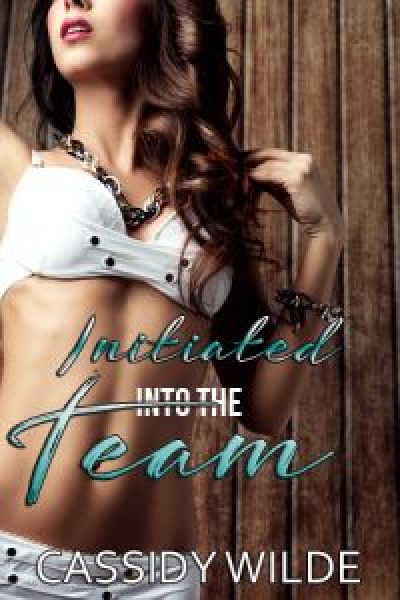 Initiated into the Team (Team Spirit #1) by Cassidy Wilde

With a happy sigh, I turned off the shower and grabbed my towel. After drying myself, I wrapped the towel around my chest and headed out of the shower toward my locker. I wasn’t really surprised to see that the locker room was empty. I’d heard the other girls leave but had decided to linger under the warm water for a bit longer. The training had been tough and I’d just wanted to bask in the heat and let the water beat some of the tightness out of my muscles.
If I was honest, I was also still a bit nervous around the other girls. At twenty, I was the youngest one on the squad, and felt naive and a bit like the ugly duckling. The other girls were all beautiful, always perfectly made up and well-dressed. They were all friendly enough but I felt as if I wasn’t really part of the team. Not yet at least. Officially, I was now part of the cheer-leading squat, but unofficially I still had to go through the team’s initiation. Problem was, I had no idea what that entailed.
During the last few days, the other girls had mentioned this initiation several times but they’d refused to go into details or answer any questions. They’d just smirked and nudged each other and told me that I would find out soon enough. One had hinted that this was the final test and that some of the players would be involved. They would be the ones to make the final determination if I was in or out. If I failed, I would be out, no matter how good I was at cheering. The team came first. I’d vowed then and there that I wouldn’t fail, no matter what they expected of me or asked me to do. I’d worked too hard to get here, failure was not an option.
No matter how hard I tried, I wasn’t able to stop thinking about this initiation. I mean, everyone has heard about the hazing rituals some frats and sororities have and this was probably something similar. My imagination was working overtime, throwing all kinds of weird scenarios at me. I was still very excited about acing the try-outs and making the team, but that excitement was a little bit dampened because I couldn’t stop fretting about this initiation. I also wondered which of the players would be involved. Gus maybe? Next to Coach, Gus was the top dog of the team and the obvious leader. He was a brilliant quarterback and one of the hottest men I’d ever encountered. The kind of man who turned my insides into goo and filled my pussy with liquid heat.
I hoped that they would get around to it soon. I hated waiting. Today was Friday and nothing had happened the whole day. I’d resigned myself to waiting until Monday as we had the weekend off. I rounded the corner behind which my locker was and stopped when I saw Gus, the man I’d just been thinking off, leaning against it. He grinned when he saw me.
“Hi, Brooke.”
“Hi,” I said, not sure what he was doing here. I mean, this was the ladies’ locker room and the men were supposed to stay out of it. I clutched my towel a bit tighter while I frowned at him.
Gus’ grin widened and his eyes ran over my body, taking everything in. It made me highly aware of the fact that I was only wearing a skimpy, wet towel that barely covered anything. It also sent a shiver down my back and heated the flesh between my legs.
I had a massive crush on Gus which didn’t help in this moment. In my opinion, Gus was the hottest guy on the team. Aside from Coach, that is. But while I tried to avoid Coach Fuller, I actually tried to get Gus’ attention. I wanted him to notice me. I knew he was single and I was more than ready for a steady boyfriend.
Coach Fuller had that rugged, older man look going for him, where the gray hair at his temples made him somehow look sophisticated and even hotter than he would have been without it. But he was also someone who just exuded authority without even trying. Even when he was being nice and easy-going, you paid attention to him.
Gus, on the other, hand was the epitome of hunky masculinity. Tall with broad shoulders, slim hips and packed with muscles without being too bulky. But it were his bright blue eyes that had captivated me from the beginning. Those and his blinding smile. When he smiled at me, my knees went week and my pussy got wet. He simply had that effect on me. He also was an absolutely sweetheart, always polite and friendly. Perfect boyfriend-material if you asked me.
As far as I knew, he didn’t have a girl-friend. None of the other girls had ever mentioned that he was seeing someone. Based on the hints several of the girls had dropped, we were strongly encouraged to make ourselves available to the players. I hadn’t yet found out what available exactly meant, but I wouldn’t mind if Gus asked me out. And more. I’d never had sex before but I loved the idea that he might be my first one.
I tugged my towel a bit more firmly around me and shifted nervously. I still had no idea why he was inside the locker room and what he might want from me. I also tried to ignore the way my nipples had started to pebble and that my pussy was really heating up. His scrutiny was doing all kinds of things to my body.
“That’s the girls’ locker room,” I decided to point out, hoping to get some reaction of explanation from him.
Gus laughed. “I know.”