You are here: Products Infatuated by M.D. Dalrymple 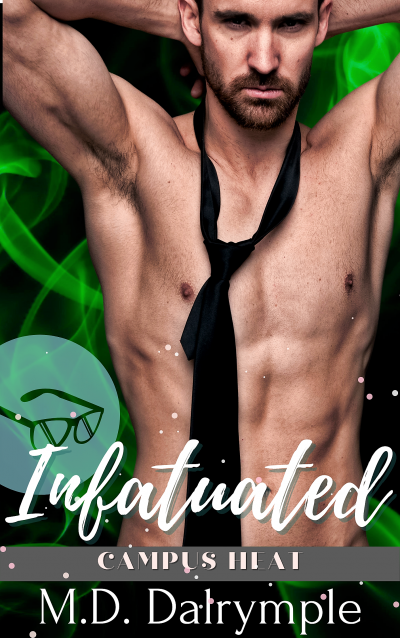 ♥ One night of passion in a bar. It was supposed to be a one-night stand. ♥

But here Finn is, standing at the front of my sociology classroom. He’s the professor?

I can’t stop thinking about him. Maybe that moment in the bar was more than a one night stand. I want it to be more. We might both crash and burn. I can’t help it.

I left the bar with only her name, Adele.

So imagine my surprise when she runs into my sociology class late.

No, she was supposed to be a one-night stand. She can’t be my student. Especially because I can’t stop thinking about her.

We both want to take it to the next level, but she’s my student.

This can end so very badly if anyone finds out.

But we are both willing to take that chance . . .

Most likely she was a student at Mount Laguna College, or the friend or older sister of someone who went there.
Either way, she was dangerous.
From the side smile on her face, she knew how dangerous she was.
And worse, he wanted her. From the minute she’d sashayed over to his table, a flare of desire ripped through him.
And Finn thought she knew that, too.
“Nope. I was going to meet up with some friends, but they canceled. So, I’m flying solo.”
“That’s a bummer. I’m Adele.” She offered her hand over the table, long fingers with chipped red nail polish.
“Like the singer?” he asked. She nodded. “I’m Finn.”
“Finn. Cool name.”
“Do you want a drink?” It seemed the polite thing to ask. She shook her head.
“Nope. My friends have been getting on my nerves. Look, you see?”
She leaned over the table as he had, her highlighted hair brushing against his face. He turned his attention to where she indicated. Finn saw it right away.
Couples. Her friends were coupled up. One couple had their back to him but the other, an athletic looking young man with a black-haired girlfriend, couldn’t keep their hands off each other. Finn didn’t blame her for searching for other company. She probably felt like a fifth wheel. And as he was alone, he might have looked a better option than being around people who made her feel more alone than she already did.
Finn understood that too well — loneliness.
“I see it. What, you decided to find random guy to join instead?”
“Not any random guy. Not like those drunks over there.” She cocked her head toward the end of the bar. “I saw you come in, and you only had one drink you were still nursing. So, you didn’t come here to get blitzed. You were watching the door, so you were waiting for someone who didn’t show. Stood up. That sucks.”
Finn’s wide eyes stared at this startling woman across from him. She had seen all that? She should be a sociology major, if she was a college student. She was great at reading people. A soc major or a politician.
He smiled at the thought.
“You have a great smile,” she told him, her eyes narrowing slightly as they shimmered in the bar light.
Why the hell not? Finn told himself. I’ll bite.
“Not as great as yours,” he replied, hoping it sounded as smooth to her as it had in his head.
Her smile widened. It had sounded as smooth.
“Come on,” she said, taking his hand as she stood. Without thinking, he rose.
“Where?”
“Follow me.”