You are here: Products infallible by carlyle Labushchagne 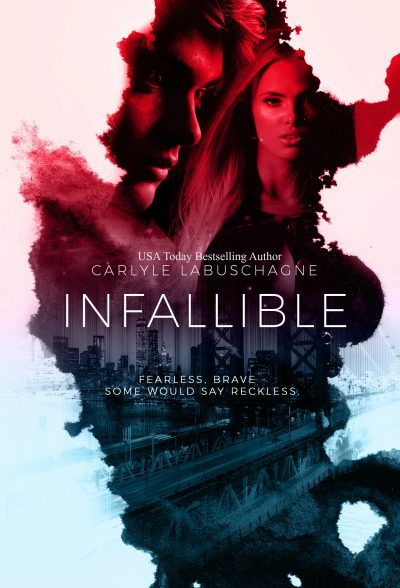 Cursed in love death was coming for her once again…
Sexy, smart and ambitious, South African Detective Scarlet Anne Martins Lands a high profile case were her skills are recruited by the FBI.
But never had Scarlet imagined how quickly her dreams could slip through her fingers when she meets her new partner Agent Blade, who appears to have a vendetta against the serial killer she’s assigned to bring down.
At a shocking turn of events, Scarlet finds herself a fugitive in a foreign country after being framed for aiding the escape of this Serial Killer. She starts to suspect her new partner, but despite herself she can no longer deny her feeling for Agent Blade, and her desperation to save him will ultimately be what could kill them both.

Carlyle Labuschagne is a USA Today bestselling author who shares a home in South Africa with her two boys and married her high school sweetheart. Her writing has been described as extremely descriptive and riveting. Best known for her Award winning YA books The Broken Destiny and Evanescent, she's recently crossed over to suspense and crime fiction. When not writing she's running a publishing company, hosting a radio talk show on Friday's, establishing YA libraries for the underprivileged in her community and sharing her love for books to anyone willing to listen, or even those who don't.

I was inspired by a few visits into NYC – the lights, the maze of buildings and streets, wondering what it would be like for a foreigner was on the run from the law and had to find her way out of both the city where she was being hunger and away from the enemies trying to frame her.

“Now!” Agent Blade yelled, dashing over to the refrigerator. As Alaric shoved Scarlet into the confined space, he inhaled deeply so that they could both wedge in tightly before slamming the thick door shut, locking them in for a hell of a ride.
Scarlet pinched her eyes shut, her hands gripping the smooth, cold surface of the interior wall behind her. Awaiting the blast, she could only imagine how much worse it was going to be, worse than she could ever possibly imagine. Deep down, she hoped death came swiftly.
As a few more seconds passed, her heart raced in anticipation. Just as the thought of a fake bomb crossed her mind, the sound of the explosion ripped through the darkness, the blast displacing the air around the room. She grabbed onto Alaric as the shockwave hit them with so much force, she felt her entire body rip apart as the chaos entombed them both within the gluttonous claws of hell itself.
It was up to God now whether they survived or not.

DETECTIVE MARTINS WAS SURE SHE WAS DEAD, and she was certain she had been sent right into the starving depths of a searing hell. The heat that engulfed her was unbearable, scorching in some places of her body, and blistering in others.
White noise filled her ears, sending jolts of violent pain into every corner of her skull, death threatening to tear her open from the inside. Her lungs burned for air, her chest tight as it fought for a single breath. The smell of smoke, the feeling of being strangled, and the sharp taste of blood took her asunder until Agent Blade’s coughing brought her back to the living present.
Forcing herself to breathe through the pain, she took in the thinning air, the potent sting of smoke in her lungs, sending her into a coughing fit. The chemical smell scorched at the inside of her nasal passages. Slowly, noises rolled in in waves, like the crackling of a ravenous fire monster as it ate through the building, followed by the thuds of collapsing walls and a series of knocks as the ceiling came falling down around them.
But the dizziness that assaulted her senses made it hard for her to focus. In the distance, sounds of sirens and blood curdling screams made their way into her troubled mind. Her breathing came fast and erratic, her racing heart drummed through her ears, echoing throughout the metal casket. That was when she realized Agent Blade had gone very quiet. But when she felt his hands move over her hip, it confirmed he was more than okay.
Alaric squeezed down on her side, and she returned the gesture with an embrace to his arm to let him know she was conscious, too. His breath became increasingly shallower as the air thinned out further inside the tiny space. And soon, the entire box would be spent of any remaining oxygen as they waited out the fire and collapsing skies.
As the unrelenting dizziness continued, Scarlet’s head become heavier, making it harder for her to stay awake. Alaric must have noticed, for his fingers slid down her arm and wrapped around her wrist, two fingers capturing the slow beat of her pulse. “Martins, you need…” He was so close, his breath soft against her cheek.
Her neck ached from trying to hold her head up, eventually giving up its fight, edging toward Alaric’s shoulder where she simply fell asleep with his scent reminiscent of an African spring immersing her in its crisp, sweet rapture on the way to oblivion.

Be the first to review “infallible by carlyle Labushchagne” Cancel reply