You are here: Products Indulge: A Naughty Neighbors Holiday Romance by Olivia Aycock 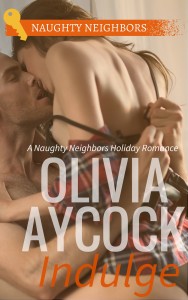 SoCal native Ashley Powell would be thriving as an expat in London were it not for the bitter cold—and a brutal infatuation with her co-worker, the super uptight Oliver Wooldridge-Langston. His manners are so perfect, and he’s so out of her league, he might as well be Prince Harry! But when he invites her to celebrate a Friendsgiving holiday weekend at his oldest chum’s country manor, she discovers a scene ripe for seduction. The only question: just who will be seducing whom?

This story stands alone without a cliffhanger. But you can look forward to revisiting Ash and Oliver’s passionate love affair—and meeting Ashley’s younger sister Emily—in Dazzle, coming later this month.

With appointments to keep, gifts to wrap, parties to attend, and food to prepare, this time of year can be hectic. And even if you aren’t rushing off to holiday shindigs, taking a little time for yourself is crucial. This story, like the others in the Naughty Neighbors series, is something you can pick up during a lunch hour or right before bed…

It was too bad they both ended up working on the train to Stroud. Ashley felt like she was missing out on some prime stare-out-the-window-and-imagine-all-the-ways-they-could-get-naked-together time. But that was not how she was supposed to be spending her time. She’d made a conscious effort this week to not find Oliver sexy, and she wouldn’t mess up her record now.
When he dropped a file folder in the hall and bent down to gather the pages, she tried to not find the way his trousers stretched tight across his ass the least bit sexy. And when they’d worked late on Monday night, she’d tried to not find the way he rolled up his shirtsleeves at seven o’clock and stretched his back sexy. Then there was the moment on Platform 1 at Paddington when his face had lit up when he saw her approaching. Wasn’t sexy. No, sir. No way. Oliver Wooldridge-Langston was the anti-sexy.
Ashley crossed her legs and mumbled an apology when the toe of her boot grazed his calf.
What he was wearing today definitely wasn’t sexy. It was so not sexy to wear a black V-neck cashmere sweater with dark grey trousers. Even unsexier that every time he moved or breathed she got a peek at some gratuitous chest hair.
Damn. European men got away with outrageous things! He was like a walking billboard for indolent playboys at…play.
Why had she even worn underwear? Or packed it? She shouldn’t find such imagery appealing. She was a red-blooded American girl. She should appreciate hard work. Gumption. Shirts with collars.
Oh, God. That crinkle between his eyes when he focused on something he was typing was going to be the death of her.
Could you die of acute arousal?
And he seemed oblivious to her agony. Quietly sipping tea. Consulting a file before furiously typing notes into his laptop. Occasionally remarking on some passing bit of scenery she might be interested in.
She wasn’t interested in the whoosh of passing color. And she certainly wasn’t interested in this compliance review. She was interested in the virtually empty train car and considering the logistics of how they could fuck in this little seating area without getting arrested. Or getting her deported.
Ashley hadn’t had sex in a twin bed since freshman year, but this was about the same size as one. Figuring out a way to do it with his big body made her wish for iced tea instead of the piping hot Earl Grey on the table next to her.
His phone rang, and he took the call. Had she not seen him answer it, she wouldn’t have known; he talked quietly so he wouldn’t disturb her—or the other three people in the car.
She tried and failed to not watch him shape the words with that wide, expressive mouth. Everything about him was oversized. It might have been comical—and shouldn’t have been attractive—the way his features fought for real estate on the planes of his face. But he was just so fucking handsome.
And so tall. So broad of shoulder! But so quiet. In a world full of piss and vinegar, of senior associates and partners posturing like peacocks, Oliver stood out. He was always a calm, rational voice when needed. People listened to him. Valued his words. Bent over backwards to please him.
But Ashley couldn’t forget those glorious moments when that giant of a man had been on his knees for her.

Be the first to review “Indulge: A Naughty Neighbors Holiday Romance by Olivia Aycock” Cancel reply