You are here: Products Indecent Exposure by N.S. Johnson 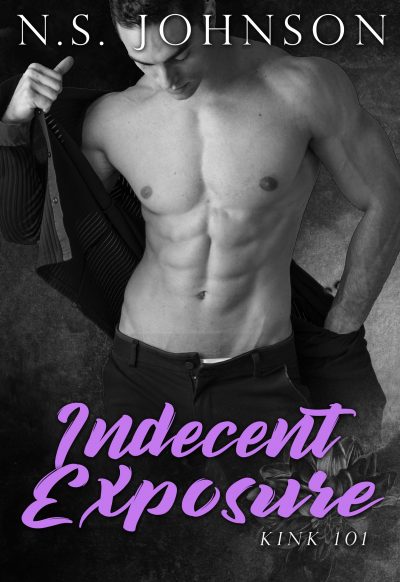 Determined to explore her wild side, Nubi applies for entry into a sex club. At orientation she falls for a Dominant, is pursued by a sadist, and unwittingly befriends an exhibitionist. But before she can play, she’ll need to get approved as a member of the Black Dahlia Club. Otherwise its back to a vanilla lifestyle.

Aside from being a writer, professional reader, and teacher, N.S. is a very bad Buddhist. She sits in sangha each week, and while others are meditating and getting their zen on, she’s contemplating how to use the teachings to strengthen her plots and character motivations. N.S. writes books for strong women who suck at love. If you rocked out to the twisted triangle of Jem, Jericha, and Rio as a girl; if you were slayed by vampires with souls alongside Buffy; if you need your scandalous fix from Olivia Pope each week, then you’ll love her books!

The guy was masturbating on the subway in the middle of the night. His long fingers wrapped around his cock, just under the bulbous head. The pad of his thumb, which coiled around one side of his thick erection, contacted the tip of his middle finger which hailed from the far side. With each thrust the sticky beads seeping from the crevice of his cockhead made a lapping sound against his palm, like the low tide pushing against the shore.
The sight of it mesmerized me, the sound captivated me. But I was also scandalized because this guy was masturbating on the subway in the middle of the night!
The train car wasn’t empty. There were other people on board. Not that they were paying attention to what was going on in the seat feet away from them. But I was paying attention -close attention. I couldn’t take my eyes off the pink tip of his penis and the milky white substance that erupted down the sides of his hand. It shot up as though the pressure had been building for more than just the few moments he’d stroked it. It ran fast and hot down his shaking fingers and into the Y-shape of his zipper.
The tip of his cock, that single eye, leaned over across his thumb and pointed its gaze at me, as though it wanted applause for its performance.
I should’ve looked away. Right?
A normal person would’ve looked away. Right?
Because this was perverted. Right?
But I didn’t look away. I would have a couple of days ago. I would’ve been disturbed way back then. But after the night I’d just had, I found it kind of hot…

Be the first to review “Indecent Exposure by N.S. Johnson” Cancel reply