You are here: Products In What Remains by K.B. Rose 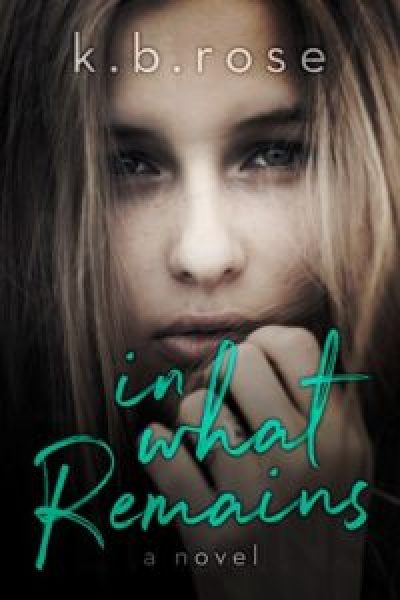 In What Remains by K.B. Rose

K. B. Rose is the author of contemporary fiction and romance. Favorite things include books that make her feel, movies that surprise her, hula hoop dancing, summertime, travel, and daydreaming (she sometimes refers to this as “plotting,” but let’s be honest here). Things she doesn’t like so much: insta-love, winter, and Thursdays. She lives in Kansas City, MO with her husband and daughter,

They rode now in a blue four-door sedan. It hadn’t occurred to her to question this, she had simply climbed into the car he indicated and locked her hands together on her lap in trepidation. She sat beside him and the space they were stuck in seemed oppressive and small. Neither of them spoke, and when she glanced at him his features were drawn tight. Out of nowhere, she wondered how old he was. It wasn’t easy for her to determine the age of people older than her. They were just…older, in a way that was hard for her to comprehend. She thought that he was somewhere in his late twenties, maybe even thirties. He had small lines at the corners of his eyes, and a rough texture to the skin above his jaw line where stubble was beginning to grow. His body was nothing but hard planes and muscle. She’d slept pressed against it last night. It was one more detail of her existence that didn’t seem material.
She still didn’t know his name. If that man last night had used it, she could not remember. She didn’t bother asking him because she knew he wouldn’t tell her. She considered what she did know about him. There wasn’t much. More questions than answers.
“How’d your parents die?” Her throat felt tight and painful as the words scratched their way out.
He was silent for so long that she didn’t think he was going to answer. She hadn’t really expected him to, anyway. But then, he said, “I don’t know if they did. As far as I know, they’re alive.”
She let this sink in, and then asked, “How old were you when – ”
Flatly, he cut her off. “Enough of the bullshit, Rachel.”
Exhaling, she looked away. With no bullshit, she said, “I don’t want to go back home.”
“Yeah. That’s starting to be obvious. Would you mind telling me why?” He phrased the question almost like he knew she wouldn’t answer it, like he was already preparing for aggravation when she didn’t.
But she did. Quietly, she said, “I don’t want to see any of the people in town. I don’t want to talk to police. I don’t want to do any of it.”
Silence met her words and she didn’t look away from the road in front of them, even when he finally spoke. “What exactly do you want to do, then?”
“I could stay with you.” She offered this up as tonelessly as she might comment on the weather, and his response was swift and severe.
“That is not happening. Get that idea out of your fucking head, right now.”
She couldn’t help but flinch, at both his words and his tone. His harsh, straightforward way of speaking was something she had never been exposed to, and she couldn’t help but feel a bit stunned. No one had ever talked to her the way he did. She remembered his words to her the previous night, and how he didn’t coddle her the way everyone had when her mother died. Somehow his brusque, bleak speech the night before had given her more comfort than all of the gentle condolences she had been offered then. But it had also hurt. She didn’t understand it, and didn’t have the energy to try. All she knew was this: she couldn’t go back home. Not without them. She lifted her face back up and, taking no time to think about it, said, “But, I know stuff about you.”
It was meant to be a reasoning point. He couldn’t let her go without putting himself at risk, and surely he had to know this. But there was a dangerous flash in his eyes when he turned his head to look at her. It should have stopped her. It didn’t. She gathered up her resolve and didn’t let her eyes waver from his. Not even for a second. She didn’t stop to consider that he was a stranger to her. That he owed her nothing. He was all she had left.
“I know what you look like.” She brought her fingers up as she ticked off the things she knew about him, and the eerily calm way his eyes dropped to them should have set off alarm bells in her head. “I know your tattoos. I know about your friend Hector. I know you used to be a ward of the state and I’m pretty sure you’re from – ”
She was going to say ‘Texas’. It was an easy guess based on their location, and the accent that crept into his voice sometimes. But her words were cut off when he lurched the steering wheel right and the car jerked to the side of the road. Her shoulder slammed against the door as the car came to a stop, and he turned to face her, one hand gripping the steering wheel. “Are you fucking kidding me? What the fuck are you trying to pull?”
Her heart jumped into her throat. She’d never heard such a bitter tone of voice, never seen someone this angry, not at her. Her nails were cutting into her palm. She jumped in her seat when he leaned across her and opened the passenger door.
“Get out,” he said.
She looked at him in shock and tried not to cry. She’d been curiously numb to her emotions all morning, but now they threatened to break free with a force that shook her. Because she’d made a big mistake. She’d ruined her last link to anyone.
“Did you hear me? Get out of the car. Now.”

Be the first to review “In What Remains by K.B. Rose” Cancel reply