You are here: Products IN TOO DEEP by Brenda Manson 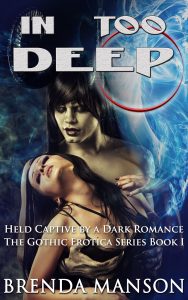 IN TOO DEEP by Brenda Manson

Nora had always lived a life consumed by the shadows, engulfed to the point where she felt her life would end. It wasn’t until her baby sister, Emerson was born that she felt true love. Emerson gave Nora’s life hope and meaning once again. Nora would do anything to keep Emerson safe. With an alcoholic and incompetent mother, Janet, Nora was tasked with raising Emerson; and had never known any support from anyone else.

It was a dusky, somber evening when Janet brought home a very dark, brooding stranger. This stranger reeked of something dank and foul, and seemed to be more interested in Emerson than Janet! Nora is faced with no other decision than to protect her sister at all costs. Janet refuses to believe the desperate plea of her daughter’s regarding her new husband. She blames Nora when the accusations come to light.

When the police get involved, Nora learns that she has acquired a support system of her own. Nora reaches back into the darkness that she knew before Emerson; and discovers a reality that she never anticipated… one which will broaden Nora’s experiences beyond her wildest fantasies… as well as her darkest nightmares! Nora embraces the darkness with both willing anticipation and fear…

Love of all things sexy and supernatural!

Chapter One
Beginnings
Nora Knox was a quiet girl, born into a broken home. Technically, Nora’s mother Janet did not know who her father was at all. Nora was an aimless child, and her primary focus was simply to survive, one day at a time. Nora had long, auburn hair and freckles, just like her mother.
It isn’t always the best moments of one’s life, the great moments of bravery or prowess, which define a person; more often it is the darkness which reflects a person’s true character. Nora’s mother, Janet, was an alcoholic, but don’t judge her on this merit alone, we all have our vices. Janet cared for Nora to the farthest reaches of her emotional and physical capacity, unfortunately, that wasn’t very far. When Nora was 10 years old, she found her purpose in life. Janet had gone through her second unplanned pregnancy and the result was a beautiful, blue eyed, blond haired, baby girl which Nora named Emerson. Conceiving two children had not proven to be motivation enough for Janet to stop her drinking and philandering, therefore, the majority of Emerson’s care fell to Nora.
In Emerson, Nora found that she was capable of a love deeper than anything she ever imagined. Emerson’s happiness was Nora’s biggest priority. Nora was the person who fed Emerson, and made certain that her every need was met. Imagine being 10 years old, only a child yourself, and having to be the person to wake several times per night to feed a newborn child. Nora was only able to do this because she had enrolled herself in home school, which she also taught herself. Nora’s life was no one’s version of ideal, but seeing Emerson laugh, helping her walk for the first time, and hearing her first sentence: “ Wuv you Nono”, had been far more rewarding than anything else that Nora could possibly imagine.

Chapter Two
Stick Horse
The next major change in her life came when Emerson was 6 years old. Janet met a man who she thought to be “the one”. He didn’t seem to mind her drinking problem, or her baggage in the form of two children. The two married almost immediately and Ethan moved in with Janet and the girls. Emerson had always shared a bed with Nora, so of course Nora noticed when Ethan snuck into their bedroom late one night and stood over their bed, watching. Nora pretended to be asleep, but tightened her grasp on Emerson. She was so disturbed by Ethan’s actions that she remained awake the remainder of the night.
Ethan’s behavior became increasingly disturbing over the next couple of days. Nora developed the habit of napping with Emerson while Ethan was at work, which caused her to fall behind in her studies. However, napping with Emerson allowed Nora to stay awake every night when Ethan would come in, but she knew that she could not stay awake forever. Nora took her mother’s car, and Emerson, and went to the hardware store to purchase a deadbolt lock for her bedroom, which she installed immediately after arriving home. Unfortunately, that night Ethan drank more than usual. Janet passed out early and Ethan tried to break down the bedroom door, which woke Emerson up. Nora held and soothed her while she cried, and resolved to tell her mother about what was going on.
The following morning, Nora brought Janet a cup of coffee and shared her concerns about Ethan. Janet was enraged, but not for the reason which Nora expected she would be. Janet accused Nora of being jealous and lying. Nora wasn’t surprised to see that she was on her own, after all, she always had been. Nora knew one thing for certain; there was nothing that she wouldn’t do to keep Emerson safe…