You are here: Products In the Shadow of the Mill Pond by Cygnet Brown 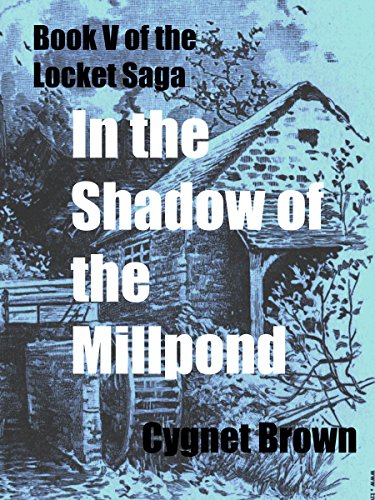 In the Shadow of the Mill Pond by Cygnet Brown

Fifteen-year-old Lacey Mayford has been infatuated with Matthew since she was a little girl. Matthew, a half-breed Indian, doesn’t see her as anything more than a little girl cousin. How can she convince him that she is growing into a beautiful young woman he should consider?

In the frontier town near the turn of the century, Matthew Thorton is blamed for Luther Hannibal’s murder after an altercation with Luther over stolen furs. Lacey defends Matthew with the help of a teacher, Felix Grackle. They look into other suspects who could have killed Luther Hannibal. Matthew’s father Luke and his best friend Jacque Pierre are looking for the person responsible for stealing the furs. They believe the thief might have something to do with Luther Hannibal’s murder.

Will Lacey be able to clear Matthew’s name? Will Luke and Jacque Pierre find the man who stole the furs? Will the vigilantes stop the Whiskey Rebellion without bloodshed? The truth is far more sinister than anyone could imagine.

Cygnet Brown grew up in Northwestern Pennsylvania, but now calls the Missouri Ozarks. Her passion for writing ignited with a writing assignment in Mrs. Watson's seventh grade and she has been obsessed with writing every since. Ms. Brown published her first book of The Locket Saga, When God Turned His Head in 2010. She has published five other books in the series including In the Shadow of the Mill Pond, Book V of the Locket Saga. In addition to The Locket Saga series, Cygnet Brown has also written five nonfiction books including Simply Vegetable Gardening (gardening is another of her passions); Help from Kelp; Using Diatomaceous Earth Around the House and yard: Living Today, the Power of Now; and Write a Book and Ignite Your Business.

In the Shadow of the Mill Pond, the fifth book in The Locket Saga series, takes up in Frontier Pittsburgh Pennsylvania after the American Revolution. This book picks up the story of Lacey and Matthew. It was inspired from the history that I uncovered about the Whiskey Rebellion. This event nearly split the country when western farmers refused to pay taxes on their whiskey.

Luther Hannibal sampled a swig of whiskey from the flask in his pocket.
"Well, I didn't vote for 'em and neither did any of my kin. None of us can read nor write. We got no need for it and we do enough cipherin' to get by. I'm looking for some more good whiskey. Can you tell me where I can get some?"

"I'm sorry, sir. I do not know. If I were to sell you whiskey here, I would have to charge you the tax, but I'm not selling whiskey, and I don't know where you can get any either." Matthew replied.

"How much do they charge if you make whiskey for your own use?:"

"They don't charge anything for whiskey that people make for their personal use. They just tax the whiskey that you're trying to sell."

Lacey balled her own hands in anger as she watched Matthew talking with the men. He stood straight and proud, his long lean face refused to give into any emotion that made him look weak. He knit his eyebrows together and he looked sterner and more determined. Lacey looked at his mouth. He tightened his mouth into a tight thin line and appeared thinner than usual. She could see that he was doing his best to control his emotions that he no doubt got from the Thorton side of the family. The fact that he could control his emotions at all was no doubt from the Lenape side of his heritage. If he lost his temper and had to fight, he would no doubt win.