You are here: Products In the Event the Flower Girl Explodes by Abby Rosmarin 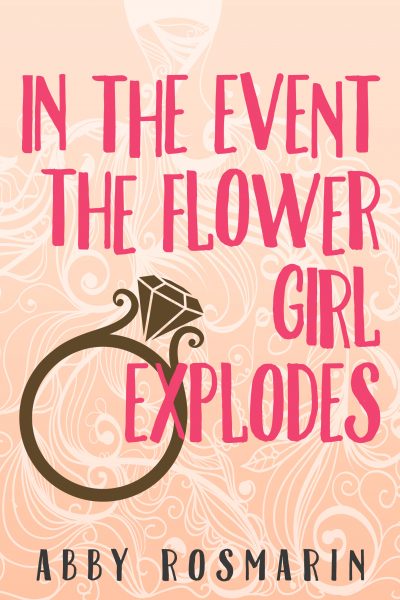 In the Event the Flower Girl Explodes by Abby Rosmarin

It’s the wedding of the century. Her big brother – the man who was a second father to her after their dad passed – is the groom. And Nicole is fighting just to keep her head above water.

She’s surrounded by an aloof bride-to-be, a psychotic mother of the bride, ridiculous bridesmaids, and a town that feels like a parody of Americana. Her own family is perfectly fine with everything – with the exception of her wise-cracking cousin Ella, whose antics only serve to get Nicole even further into trouble. The wedding stress is invading all aspects of her life, including her own relationship. Nicole only wants what’s best for her brother – but what if that involves her brother leaving his fiancée at the altar?

As the wedding day approaches and tensions continue to rise, Nicole is forced to figure out what love, loyalty, and honesty mean – before it’s too late and she loses everyone she loves.

Abby Rosmarin is the author of In The Event the Flower Girl Explodes, I'm Just Here for the Free Scrutiny, Chick Lit & Other Formulas for Life, and No One Reads Poetry: A Collection of Poems. Her work has been featured on HuffPost, Bustle, Thought Catalog, and others. Abby can be found on Instagram & Twitter @thatabbyrose and her blog at thatabbyrose.wordpress.com.

This book was inspired by a 2-year period where everyone — including myself — was getting married. No wedding is without its drama, and some of the drama was so absurd that I found myself going, "This would make for a great book someday." Eventually that lead me to create my (thankfully fictional) main character and the escapades she has to deal with.

26 Steps to the Boss’s Office

There were 26 steps from Nicole’s cube to Cassandra Evans’s office.
This was a general estimate. The final number didn’t include long strides, foot shuffles, or the moments when Nicole took a tentative step back, believing it would be easier to just retreat back to her cube and make up an excuse to her family.
Yup, couldn’t get the time off. I tried, but it looks like I’m stuck up here instead. Enjoy the wedding without me, and send my regards.
Nicole focused only on moving each foot forward. She had no clue what she’d say to Cassandra – which, to be honest, was probably for the best. Having a plan meant she could back out of the plan. Instead, she was freefalling, and there’s no real way to stop a freefall, save for reaching the point of impact.
After those 26 steps, Nicole found herself at Cassandra’s door. Before Nicole could knock on the frame, Cassandra looked up and gave a polite smile.
“How can I help you, Nicole?”
The printer is jammed. The toner is out of ink. The kitchen faucet is leaky. The office is on fire. Oh God, please let the office catch on fire.
“Um, I – uh.” Nicole swallowed and pressed her tongue to the roof of her mouth. “I was hoping to get some time off.”
“That can be arranged,” said Cassandra. “What day would you need off?”
Nicole bit at the inside of her cheeks.
“Um, I actually need more than a day.”
“More than a day?” said Cassandra. “How many days are we talking about, then?”
Nicole cleared her throat.
“Like, three?”
“Three.” Cassandra folded her arms. “Is there a medical emergency?”
“No,” said Nicole, her eyes back at her feet. “I’m actually going to Florida.”
Cassandra leaned forward and placed both hands on her desk.
“You do understand that we typically don’t give vacation days to temp employees, right?” Cassandra said slowly.
“Yes, yes, I completely understand.” Nicole faltered. “It’s not a vacation so much as… a wedding?”
“A wedding,” Cassandra repeated. “Well, congratulations to them. Who’s the happy couple?”
“My brother, actually,” Nicole replied, gritting her teeth.
A smile broke across Cassandra’s face.
“Well, why didn’t you tell me that in the first place?” said Cassandra. “I’m sure we can arrange something. You do understand that this will be unpaid though, correct?”
“Of course,” Nicole answered.
“I wouldn’t dream of having you miss your brother’s wedding. You’re the sister of the groom.” Cassandra sat back in her seat. “I remember when my own brother got married. Those last few days were chaos. I think I was more worked up than the bride herself. It was hectic, but what a memorable time. I bet it’ll be the same for you.”
The corner of Nicole’s mouth twitched.
“Of course.”
“So what dates are we looking at?” Cassandra pushed her chair closer to the desk.
Nicole sighed and licked her lips.
“The fourteenth through the sixteenth.”
Cassandra’s brow furrowed.
“Of September?”
“Of August.” Nicole gave a tight smile.
“So, this month,” Cassandra stated slowly. “Next Wednesday, to be precise.” Cassandra paused and sighed. “Couldn’t you have told me this earlier?”
“I’m sorry about that. I…” Nicole trailed off and swallowed. “I guess I’ve had a lot on my mind.”
Cassandra sighed again, this time more audibly.
“It’s not favorable, but I guess it can still be done.”
Nicole dragged her fingers through her hair.
“Thank you. Thank you so much.”
“No worries. Have fun next week.”
Nicole nodded absently, started to turn toward the door, and immediately turned back to Cassandra.
“I can work while I’m there,” Nicole offered. “I can even put more hours in today and next week, so I don’t fall behind in anything.”
“That won’t be necessary.” Cassandra smiled. “Your tasks are easily transferable. We’ll be just fine while you’re gone.”
“Great,” said Nicole, forcing her expression to stay blank. “Good to hear.”
“Is there anything else you need from me?” Cassandra asked.
“No, no, that’s it.” Nicole gave a wavering grin. “Thank you again. I know this was short notice…”
Cassandra waved away Nicole’s words.
“Not worth groveling over,” said Cassandra. “Besides, if I were in your shoes, I’d choose gaining a sister over some temp gig anyway.”
The blood drained from Nicole’s face as her mouth went dry.
“And, if I don’t see you beforehand, I hope you have a nice weekend,” said Cassandra.
“Yeah, you too,” Nicole croaked. Cassandra turned back to her computer and resumed typing at a pace that gave no hint that she had ever paused in the first place. Nicole pressed her lips together as she exited Cassandra’s office, taking a longer, more circuitous route back to her cube.
Nicole stared at her desk, desperately trying to continue what she was working on. She moved a few papers around. She opened an email and looked at the words without actually reading them. Within minutes, Nicole gently placed her head in her hands. She pressed her fingers into her brows and sighed. She moved only when her elbows started slipping out from under her.