You are here: Products In the Calyx by Libre Paley 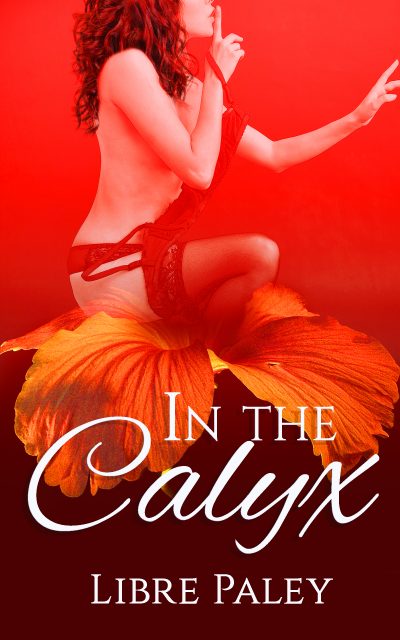 In the Calyx by Libre Paley

On ordinary summer day, Charlotte steps exhausted out of her busy, juggling existence and is presented with the choice of leaving it all behind for one week of incredibly adventuring, in which she acts out her hitherto secret sexual fantasies.
As the guest of the elegant and enigmatic Mrs Gizela Konta and a participant in the Calyx programme, Charlotte is serially re-awakened, seduced, encouraged to take on both dominant and submissive roles, and delivered of the most intense of pleasures.
Along the way, she meets Grigori, impossibly handsome and inscrutable, he is in hiding from a world that has hurt him. Until he meets Charlotte, the first woman in a long time that could tempt him back.
After one final night beyond her imagining, Charlotte will find returning to the real world harder than she’d anticipated.
A modern take on ‘chateau erotica’, In the Calyx is a sensual, erotic, and romantic novel for every woman who needs time out to indulge her fantasies.

LIBRE PALEY lives by windswept moorlands in England, a dark and brooding landscape from which she derives much inspiration. Libre’s aim is to write erotica that is sensual and emotionally intelligent. After years spent working in different countries, Libre likes to include details from her travels and experiences in her work.

This work was inspired by the need of today's women, whether hectically busy with work, families, or both, to keep hold of their sexual identities and not lose their fantasies.

It was deserted, but the mise en place suggested someone had walked out mere moments earlier. A bottle of red wine breathed uncorked. Pots were stationed to simmer on the gas rings, spoons and bowls taking their posts on the counter. In the air hung complex smells, herby and savoury, not fighting but harmonising. A sweet, plummy fragrance was pierced by a floral hint of vanilla. A singular tang cut through it all, which couldn’t be anything else but chilli, conveying both scent and taste at the same time. Everything laid out waited to satisfy the appetites. This was another theatrical set, ready, I hoped, for play rather than for penance.
Stage left, a man entered. In plain chef’s whites, lean and clean-shaven with a strong nose, his dancing eyes and curling mouth looked as though they wanted to break into an uncomplicated grin. And he was pleased to see me: “Madame – or maybe it is Mademoiselle? You have arrived to assist us in testing our recipes?” he asked. Wordless, I nodded, yes that was why I was there, what other reason could it be? The chef had a pronounced French accent, I observed. Well, I would have been disappointed if he had hailed from anywhere else.
Seconds later, two colleagues followed him in, also male, also in chef’s whites, long-sleeved, collarless jackets, closed double-breasted with black buttons ranged in two parallel rows down the front. My French man, whom I took to be the head chef, introduced his small team with a flourish of words and gestures: “Let me introduce my sous chef, Malak, winner of excellent reviews for his work. And this is Ole, our electrifying new chef de partie.”
Sous chef Malak was slim in build, his charcoal hair combed ferociously to the left, a close, precision-clipped beard on his otherwise boyish face. In contrast Ole, the brawnier chef de partie was fair with wide-spaced eyes as unfathomable and Nordic blue as a fjord.
The head chef regarded at me as though he discerned something deep inside my spirit of which I was unaware of, but which amused him. His Gallic accent was matched by a voice rich in timbre and calm in tone. Its intimate quality worked on me like a sedative, making me woozy and amenable. He stood close enough to transmit body heat, stroking light fingers along the tender insides of my forearms as he spoke, up to my inner elbows, creating tiny electric sparks up and down my skin. This effect was so entrancing that I did not catch his next question.
The chef’s face creased and his eyes sparkled brighter as he broke into a spontaneous smile, and repeated: “Would you prefer to begin now?”
I gave a confused nod in response, but said, “But… Begin what?”
“Why eating, of course!”
Bien sȗr indeed. I let myself be seduced. He walked his fingertips to my neck and mapped down my throat to the tops of my breasts, the point where they arced out of my bra and chemise.
“So hot in here. I can tell your skin is getting warm. And also, it is such a messy place…” He skimmed his fingers upward along my forearms, then let them follow fluttering lines upwards across my shoulders, pushing a little way into the hems around the shirt armholes. “So maybe you would feel better…” his voice lowered to a husky breath “with fewer clothes on?”
At these words, as though a command had been uttered, the other two chefs drew close, the trio forming an approximate triangle about me, two in front on either side, one behind. With the prodigious expertise I imagine chefs must acquire with their craft, they divested me of my clothing, dexterous as peeling a peach.
They worked as a well-coordinated team. Their closeness was intense, but thanks to their skills, at no point did their hands touch me directly, nothing but the departing fabric brushed against my skin. Each garment was folded and set aside in turn upon an adjacent counter. One by one, the buttons of my blouse were sprung, succeeded by the rustle of material as it slipped from my back. My skirt zip descended with a gradual but firm glide, the falling cloth sweeping my knees; I did not even register stepping out from it. As if thanks to a magic recipe, the bra clasp was undone without the evident contact of their fingertips. My breasts were freed into cool liberation, nipples puckering as they were clinched by the air. With a sweep of their smooth palms against my thighs, my pants glided down my hips and thighs, and away.
Once they had stripped me entirely, I bathed a while in the heat of their bodies near mine, in that distinctive scent of man, multiplied by three. The small brigade took a pace away, leaving my path clear.
The head chef put the tip of one light hand to the base of my spine, enough to circle me round so I faced the kitchen table. He indicated with a courteous gesture, forearm bending down from elbow, I should take my place upon it.
Obligingly, I trod across the cool flagstones to sit on the shorter edge and pushed back, positioning my body down full length on the table. My hands moved sideways to grip the each of its longer edges, as if to prevent myself from pitching upward into the atmosphere. The texture of the wood against my shoulder blades, bottom and thigh backs was of once-rough grain worn smooth with years of use and seasoning with oil. Above me, hung a row of ridged glass light shades from the washed-out ceiling. Laid out flat, lids half closed, an intense hunger passed through me in palpitating waves. While I waited for them to take me for lunch.