You are here: Products IN HIS KEEPING: CLAIMED by Mia Frances 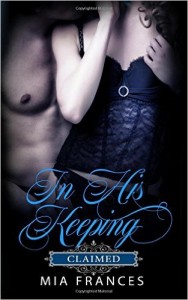 IN HIS KEEPING: CLAIMED by Mia Frances

Jealous and angry, her relationship with Connor in tatters, Sylvie decides to escape her penthouse prison. She flees to an isolated cottage in the Catskill Mountains where she hopes to lick her wounds and mend her broken heart. She may have escaped her lover, but not the killer. He knows where she is…and he’s coming to claim her!

Be the first to review “IN HIS KEEPING: CLAIMED by Mia Frances” Cancel reply