You are here: Products In Empires and Embraces by Sai Marie Johnson 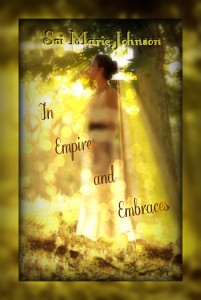 In Empires and Embraces by Sai Marie Johnson

Caecelia of House Servili has lived a privileged, and esteemed life as the daughter of a Roman Senator. Her entire existence has been one of high society, and the finer things in life, but when an enemy Spartan King comes to burn down, and slaughter her parents Caecelia is taken captive. Faced with the loss of her kin, and the devastating realization of her freedom being ripped away Caecelia fights against the handsome, and fearless King Xenocrates Thernopae. Will the damsel in distress make it out alive, or will her new life be one of complete servitude?

A mother of four children including a daughter, and three sons Sai Marie is a creative mind who enjoys a plethora of activities. Married to a Veteran, and owner of a dachshund she likes to spend her days writing, reading, and discussing the art of the quill, pen, or keyboard. With a wide variety of subjects Sai doesn’t consider herself a genre writer, but rather an author of whatever happens to come to mind. With a Bachelor’s Degree in Creative Writing as of September 2014 Sai writes everything from poetry to scripts in every category from Non-fiction to fiction including children’s stories, erotica, historical romance, and sci-fi. She really is so varied that it’s hard to put her in any category.

I have a deep love for Greece, and Roman mythology. 300 really did help inspire me with this as did the Immortals movies. I wanted to do something in honor of that time period.

“Caecelia?” He called out, and flung the remaining sheets from their bed. He crossed the chamber quickly peering out the same window that Caecelia had peered out hours before. Before she had been taken captive. Xenocrates stormed back across the chamber, and flung the door open before bellowing into the halls, “Where is Caecelia?” Guards came running from all directions lining up before their King who stood with a glaringly angry expression painted on his features.
“The queen has not been seen since last night when she left with you, milord.” One of the guards replied.
“Has she been seen by any of the servants today? Search the grounds, and bring me her handmaidens Athenia, and Alathea! Also bring me Juleppa. I want Caecelia found now!” He barked viciously in the guard’s face. The guard gave a nod, and murmured in agreement turning to follow orders before angering the King anymore than he already was. Xenocrates chose to continue down the opposite way to search for the queen. His heart began to beat wildly nearly out of his chest, and as he came out into the courtyard he began screaming at all who were gathered there, “Where is Caecelia?” Men, and women ceased all action, and turned to stare at their King in shock.
“None of us have seen her, milord.” One man announced. He spoke lowly, and respectively but stood firm in place before the King. Behind him a woman began to jog into the courtyard, and as she came to stand near the King she slowly spoke,
“Your Majesty, we have found something.” She whispered quietly. Xenocrates turned, and narrowed his eyes.
“What is it you have found?” He asked suspiciously.
“It for you, milord. I know not.” She said lifting a small wax-sealed parchment for him to see. Xenocrates tore it from her grasp, and cracked the seal in haste as his eyes ran over it.
“It is a ransom. She has been taken by Arabic Mercenaries.” He murmured, and tossed the parchment to the ground. In anger he pointed to the stables, and bellowed once more, “Men gather the horses, and be prepared to go out. My wife has been abducted!” In a near run Xenocrates made way to the stables himself without taking the time to gather armour, or weapons. Time was his only weapon now, and retrieving her before it was too late was his sole mission.
Moments later Xenocrates was galloping down the hill toward the forest line, and gaining more speed by the second. In his hand he held a spear, but nothing else to aid him in his quest to save Caecelia once again. Whatever it took somehow, someway Xenocrates would have her as his, happy, and honestly. Even if he had to kill everyone he came across. Even if he had to wage a war as legendary as that of Helen of Troy’s, he was intent on that.