You are here: Products IMPOSTER: The Protectors Series — Book One by Karen Fenech 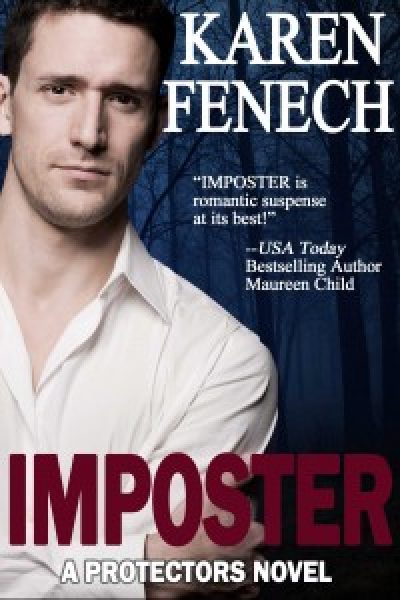 IMPOSTER: The Protectors Series — Book One by Karen Fenech

THE PROTECTORS: Though they work independently and at times are oceans apart, their ties to each other remain strong. They’re related by blood or bond – this group of men and women in law enforcement, government intelligence, and the military who do what others cannot to serve, defend, and protect.

IMPOSTER: The Protectors Series – Book One

Chemist Dr. Eve Collins, wrongly accused by the CIA of developing and marketing a chemical weapon, learns she has been set up as a scapegoat by someone seeking to hide his own guilt. That “someone” wants her dead. Her life depends on making no mistakes – like trusting the Central Intelligence agent assigned to her case, a man she’s falling in love with.

CIA Operative John Burke doesn’t believe her claim of innocence. When an attempt is made on her life, he believes her accomplice has turned on her. But something doesn’t add up about Eve and her role in this crime she’s accused of. Burke has too many questions, including – has his judgment been compromised by his fierce attraction to her?

It’s a question Burke asks himself again and again but when he learns Eve’s would-be assassin is close, he goes on the run with her. It’s a temporary solution – running will not keep her safe. Burke must find the assassin – or die trying.

Eve left the Porsche and stumbled out onto the asphalt. She was still holding her phone and dropped it onto the pavement as she ran to the sedan.
She reached it and seized the lid just as the dark-haired man was about to slam it. “You can’t move Richard’s body. Drive back to the nearest city and send the police.” What was the name of the last place they drove through? She shook her head in frustration. She couldn’t recall it. She eyed the two men. “There’s a city about a forty minute drive east of here. Since you were on this road, you would have passed it as well. There’s bound to be a police station there.”
The man slammed the trunk and turned to his companion. “You’d better get going. I’ll be in touch.”
“Will do.”
The men acted as if she hadn’t spoken. Eve reached out and seized the dark-haired man’s forearm. Beneath the conservative gray suit was hard muscle. Instead of digging into skin, her nails bent. She bit down hard on her back teeth “Did you hear what I said?”
He met her gaze. “Every word. I’m afraid, however, that we will be removing the body.”
She could see the promise in his eyes, and her anger spiked another notch. “Listen to me— ”
“Dr. Collins—”
“You know me?” She searched her memory, but could not recall ever meeting him. He obviously knew her though, and though he had yet to harm her, that fact unsettled her, reminded her that this man and his companion had been following Richard.
Who were these men? Eve’s stomach went as tight as a fist. Her body went cold with apprehension but she knew better than to show it. She crossed her arms and narrowed her gaze on the dark-haired man who appeared to be leading the other man. “I asked you a question.”
“We’ve never met. I’m John Burke.” Burke indicated the man beside him. “This is Michael Lanski. We work for a division of the Central Intelligence Agency.” Burke withdrew a small folder from inside his suit jacket and opened it for her inspection. It was his picture ID. He replaced it, then repeated to Lanski, “Get going.”
Lanski got behind the wheel of the sedan, and Eve’s heart thumped. “Where is he going?” she asked Burke. “Why were you following Richard? What does the CIA want with Richard’s body?”
“We’ll talk on the drive to Rowland,” Burke said. “Let’s go, Dr. Collins.”
Eve narrowed her eyes on Burke. “You know where Richard and I were going?”
Burke gave her a level look. “Oh, yeah. We know a lot of things about you and Richard.”
Eve arched her eyebrows at the cryptic statement. “What is that supposed to mean?”
Before Burke could respond—if he’d intended to—Eve’s attention was drawn by the sedan. Lanski spun the car in a U-turn then, tires squealing, sped down the road. Dust swirled in the air where the car had been an instant earlier, and Richard was gone.
Again, Eve felt tears burn. She forced them back and confronted Burke. “I asked you what the CIA wants with Richard’s body.”
“And I told you we would talk on the way to Rowland,” Burke said.
The sun had lowered and dusk had descended. In the interval between day and night, there was a stillness, a quiet time. In the silence, Eve became aware of the hum of the Porsche’s engine. She’d thought the car was disabled by the accident, but Burke or Lanski had started it. Obviously, Burke intended that they leave there in Richard’s vehicle.
Eve crossed her arms. “I’m not going anywhere with you, Mr. Burke.”
He braced his hands low on his hips. “Are you thinking to wait out here, hoping another car will come along?”
“Oh, no. I am leaving. You’re not. I’m taking the car. You should have gone with Lanski.” Eve’s cheeks warmed. “This isn’t over. If you won’t tell me what I want to know, I’ll get my answers from your office. I will get Richard’s body released. I will find out why the CIA even knows my name.”
Eve moved past him toward the car.
“You aren’t going anywhere without me.”
She glanced back at Burke. He hadn’t moved, but his eyes had hardened and she knew he meant what he said. He outweighed her by at least seventy pounds and topped her by a good eight inches. Did he intend to use physical force to detain her? When she’d been on the job, she’d taken down men of his size before. Still, he would need a reason to insist that she accompany him. He was an officer of the law, after all, not a thug.
She raised an eyebrow. “If you want to stop me, you’re going to have to place me under arrest.”
Burke reached into a back pocket and held up a pair of handcuffs.
Eve’s lips tensed briefly. “You have to be out of your mind, Burke. I’m a chemist not a criminal.”
“You set the terms, Doctor. We are going to talk. If I have to arrest you to do that, I will.”
“This is ridiculous. You can’t arrest me without cause.”
“Oh, I have cause.” He leaned in close to her, and his voice lowered to a near whisper. “You’ve been named in a terrorist plot, Doctor. The charge for committing an offense against your country is treason.”

Be the first to review “IMPOSTER: The Protectors Series — Book One by Karen Fenech” Cancel reply