You are here: Products Impassioned Deceit by Faye Hall 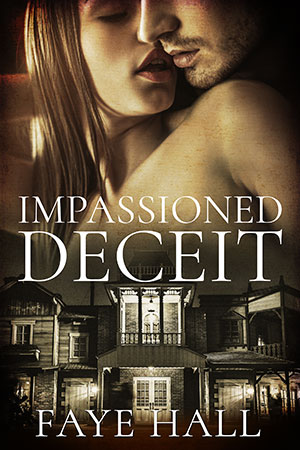 At thirty-two, Hannah Wagstaff’s scandalous past, and the scar it left her with, has made her a spinster, scaring away any offers of marriage. She had given up on love until by chance she was reunited with Patrick, a man who had lit a flame in her heart years ago before disappearing from her life.

Patrick O’Doherty couldn’t believe his eyes when he saw Hannah. He had been certain he would never see her again, but there she was, and this time he would do anything to keep her in his life.

Things take a drastic turn when Patrick’s vengeful stepfather starts demanding ownership of the cattle station that was left to Patrick by his father. Suddenly, Patrick finds himself on the run for his life, trying to uncover the secrets of his stepfather’s past and the reason he would be willing to murder for a cattle station.

Hannah is distraught when she’s told Patrick died in a fire. Her grief continues when her sister is kidnapped without any clue to who could have taken her. Months later, when her sister returns, Hannah goes looking for the culprit. What she finds is Patrick, alive and working as a bartender at a hotel.

Passionately reunited with Hannah, Patrick discovers that not only is his life under threat, but hers as well. What secrets tie their families together? Will he be able to protect Hannah, or will his love for her ultimately cost him his life?

Faye Hall spent her early years listening to stories about the families – including her own – who settled townships in and around her hometown in North Queensland, Australia. The local townspeople, including her own parents, told her stories of corruption and slavery, along with family secrets and forbidden love.
Desperate to remember what she’d been told, along with her already growing love of writing, Faye began to write about the history of her local area. Never could she have imagined the history of her small home town in Australia would become a growing list of published books.
Faye’s passionate stories combine controversial subjects and provocative encounters as her characters struggle to survive the lifestyle in early rural townships throughout Australia. She explores slavery and abortion, drug addiction and murder, as well as forbidden love and passionate affairs of the heart.
When she’s not writing, Faye enjoys sharing a bottle of wine with her husband in their ever-growing garden, and encouraging the varied interests of their children.
Explore the world of Faye Hall, Australian Historical Romance Author at her website https://www.fayehall.com.au

I was once like Hannah, believing I would never get a second chance. Being reunited with the man who ultimately became my husband – we'd met years before- changed all that. It was when I did an inyerview for the local paper and was asked about my journey in writing that my own rocky road to romance came up. It was retelling my own story that inspured me to write about Patrick and Hannah.

Patrick walked toward the waterhole, the sound of his father's departing carriage drifting off in the distance behind him. He had come here to swim several times over the years, finding it a welcomed solace from the heat in this country. Was that why Hannah had invited him here? He could think of no other reason. Even if his assumption was wrong, and this visit was brief, he was just happy to be seeing her again.

As he neared the water, his gaze went to the dark-haired woman sitting on the bank, her feet dangling in the water. He was going to announce himself, but in truth, he didn't know what to say. He cleared his throat nervously, hoping that would be enough to draw her attention.

She turned to look at him, a huge smile filling her face. "I feared you wouldn't be able to come."

"My father dropped me off on his way to deal with some business in Inkerman," he explained. "He's going to collect me on his way home."

She stood and stepped toward him. "How long can you stay?"

The pair stood there, their gazes joined. He wanted to ask her so many questions, hungering to know just who she was.

"Can you swim?" she asked. "Or we could just go for a walk around the area."

Her uncertainty confused him. "Why did you ask me to meet you here?"

She bent down and slipped off her shoes. "A swim seems like a better idea in this heat." Her hands went to the buttons on her blouse, unfastening them.

"What are you doing?"

She giggled. "You can't expect me to go swimming in this. I'll drown from the weight of it."

Patrick watched as she stripped down to her chemise and drawers before turning and running into the water. Hesitating only a moment longer, he took off his shoes, then his shirt, throwing it beside her clothes.

"Is that all you're taking off?" she asked.

He walked toward her and waded through the water until he was only a few feet from her. "I think it's for the best."

She began to giggle. "Are you shy?"

He shook his head, sharing in her humor. "I just think what lies beneath my trousers is a bit too much of an introduction given we only met an hour ago."

Her laughter began to fade, and he watched as a cheeky grin spread across her lips. "I'll take my chemise off if you take your trousers off."

He couldn't believe what he was hearing. "You can't be serious?"

The pair waded in the water, their gazes joined, each wondering if Hannah would indeed go through with her side of the bargain. Patrick knew he shouldn't encourage such behavior, but the thought of being so close to this woman—and so revealed—both thrilled and scared him. Never had he met a woman so forward, and he needed to know now more than ever if she was serious or just all bluff.

"You have yourself a deal," he finally said.