You are here: Products I’ll Be Home For Christmas by Lynda Belle 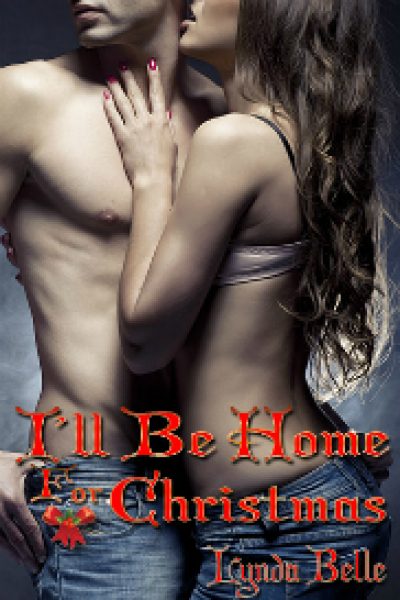 I’ll Be Home For Christmas by Lynda Belle

Theresa had decided to stay home for Christmas.

Who needed the family stress? She was going to be the tough, singleton on her own.

Nick was home for the Holidays too. Why not get together for a little Christmas cheer? Turkey and cranberry sauce always tastes better when two are sharing a meal together. Or when it’s shared on each other. Theresa gets the best gift a girl could want. A man that wants her on Christmas Eve, and she can’t get enough. Nick unwraps her slowly, giving her something Santa never could.

I was listening to the song “Christmas Wrapping” by the Waitresses. It gave me an idea for what happens if you stay home for Christmas, and why that can be so lonely. But then the magic of Christmas happens, and you find the guy you’ve been crushing on calls you. What would happen next? I wanted to know, so I wrote the short.

“Hi, is Theresa there?”
I hadn’t heard his voice since the party. I recognized his raspy, sexy tone from whispering in my ear for my number. It immediately started getting me wet. I could see him clearly in my mind’s eye, decked out in his kilt and all his Scottish costume finery. How I wanted to run my hands through his brown, wavy hair then. I wanted to wrap my hands around his curls while he gave me a good pounding. To be taken in a kilt is the best gift a girl could ask for. A white billowing shirt hid the definition of his chest.
I eyed him during the party enough to see some girl hanging over him much of the time. It was hard to slip him my number with her constant shadowing. I managed to slip it into his hand dancing near him. He had nodded to me. I smiled back. But he hadn’t called. Now, he was on the phone.
“Yeah?” I had to swallow to keep my cool. I could feel my mouth going dry already.
“This is Nick Scowfield. We met at Bev’s Halloween party. Sorry it took me such a long time to call, but I’ve been busy.”
“Yeah, it’s a crazy time between Halloween to Christmas. Especially with finals ending last week.”
“I know, right?” His voice sounded so relaxed, with the hint of a deep, raspy tone that makes a man sexy. “I’m glad it’s all over and I can relax. How about you? What are you doing for Christmas?”
“I’ll be home for Christmas this year. I’m chilling away from the family. Besides, it saves money to not go home every year.”
“I know what you mean. I’ll be home for Christmas too.” There was a pause before he continued, “I didn’t expect to be home, but it’s just turned out that way.” He paused for a moment. “The bad breakup has done a number on me.”
“Was it that girl at the party?”
“Yeah. We were starting to drift away back when I met you. I thought to call you too. It would have been awkward calling right after everything went bad for us. But I really wanted to get to know you that night. I’m sorry about that.”
“But you called now.”
“I did.”
“And you’re not doing anything for Christmas?”
“No. I didn’t have plans, just watching TV,” I lied. I was thinking of going to a movie. But hot guy trumped any other plans. Things were looking up. “You want to come over tomorrow? I can cook a small Christmas Eve dinner.” I had the sudden urge to not be alone. Well, really, I wanted to see what he would look like without his kilt. “What do you think?”
“I think I’d really like that. It would be nice to not be alone for Christmas.”