You are here: Products I’ll Always Love You by Lorhainne Eckhart 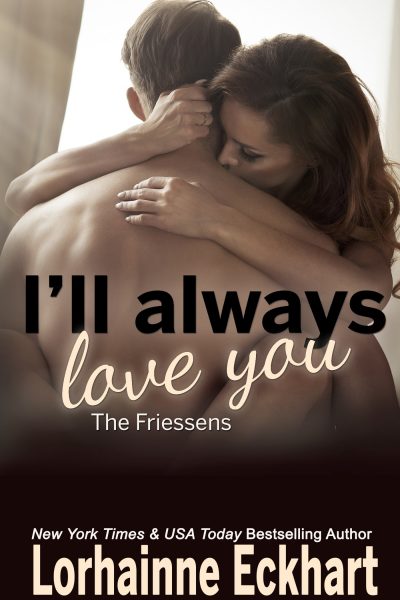 It was the hottest night of sex he’d ever had. Jeremy Friessen had heard the whispers that he was just like his father, with his looks, his bad ass attitude, and arrogance, and he’d never forget the night he’d spent with his best friends sister until she up and left, one day just three years ago.

But now she’s back, he’d caught a glimpse of her at the traffic light again at the store and when her eyes connected with his, she pretended as if she didn’t know him, and that made him angry until he realized she couldn’t hide her reaction to him.

But what Jeremy doesn’t know is why she left, whatever her secret is–whatever her reason was for disappearing, Jeremy is determined to find out everything, and when he does he may wish he’d never found her.

With flawed strong characters, characters you can relate to, New York Times & USA Today Bestselling Author Lorhainne Eckhart writes the kind of books she wants to read. She is frequently a Top 100 bestselling author in multiple genres, and her second book ever published, The Forgotten Child, is no exception. With close to 900 reviews on Amazon, translated into German and French, this book was such a hit that the long running Friessen Family series was born. Now with over sixty titles and multiple series under her belt her big family romance series are loved by fans worldwide. A recipient of the 2013, 2015 and 2016 Readers’ Favorite Award for Suspense and Romance, Lorhainne lives on the sunny west-coast Gulf Island of Salt Spring Island, is the mother of three, her oldest has autism and she is an advocate for never giving up on your dreams.

He was so close, and she turned, flicking her eyes up, the odd hazel that was a shade darker than her brother’s. She wore a tank top with a gray cardigan and faded blue jeans, and he realized she was looking right at him, and the smile she’d worn seconds earlier had faded. There was no recognition, and she pulled her gaze away as if she hadn’t even seen him. Damn, he couldn’t believe it. How could she have forgotten? She was walking away. “Tiffy,” he called even though he knew he shouldn’t. He should let her go, let her walk away. He should just pay for his junk food and get the hell out of the store before Alex learned what he did to his sister. He saw her freeze about ten steps from him. Her back stiffened before she turned, and he could see she couldn’t hide her reaction to him. “Hi,” he said. “I thought I saw you at the lights in town.” She turned around fully, holding her basket, but there was no friendly smile, nothing that said she knew him. She opened her mouth, he thought to say something, but instead she let out a breath as he stepped closer again. Awkward was all he could think. She had to know who he was. How could she not? He took in her curves as his gaze swept over the body he remembered, the same full pink lips, her perfect chin. She wasn’t looking right at him. It was an awkward glance to the side, down and to the baked goods, before her gaze landed back on him. “Yes?” was all she said, as if he were a stranger. Like, what the fuck?