You are here: Products IF TIME COULD WAIT by P.S.Hope 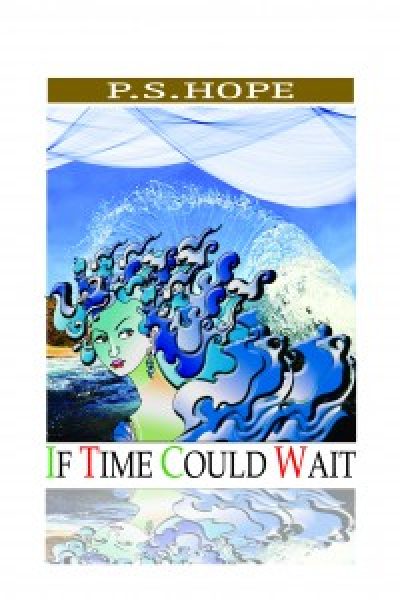 IF TIME COULD WAIT by P.S.Hope

Returning home from sea after three years, a place he had found as an escape from the pain caused by his unfaithful first love, all Michael saw in a girl was his chance for vengeance. His feelings of hurt aggravated to a new high on hearing his sister’s words that the girl-next-door, Catherine, was different. To prove that she was wrong, Michael argued that he could wreck Catherine before he left for sea.

Little did he know that his life would change forever, that his fate would be in the hands of the people who blamed him for what befell upon her. The series of shocks started as the first few lines written inside Catherine’s journals.

Then he would have to challenge fate…….for good or for worse!

Was a mariner and is now a fulll time author. The incidents in the story has a touch of true life experience

“Oh thou soul-mate of mine;

Won’t it be hard to live with you no more nearby?

But alas as the road lies parting now-a-time,

My love, I figure it’s safer to tell you goodbye.”

“Dear Cathy, how I wish, if only yesterday’s dreams were today’s reality.”

It’s said that hope grows with light but, for me, the rise of sun in the distant horizon drew the gravity of my situation on to my already hysterical mind. The endless miles of orangish dark sea, its swells ending in front of the crimson background of the horizon, clearly codified my adverse state of helplessness. All of it felt like an immense portrait of distress and, except for the gurgling swells breaking on my face and the wind kissing me on its way past my ear, the only sound that broke the deadly silence was my long lone whimper for help.

The vomiting started as a series of coughs, significantly increasing into bouts of nausea which finally ended in a violent throw-up of fluids. A considerable amount of salt water, along with the mixed contents of cereal and bread I had for my early morning breakfast, got flushed off through my mouth and nose. Finally, after what felt like an unstoppable struggle, I felt my body relax and resume its normal breathing as soon as the violent throw-up ended.

I knew that this was going to be the last sunrise I would ever be seeing in my life and watched in awe, for the first time, as the sun’s upper limb broke the horizon, peeking himself from the depths of the seas as he made his journey back onto the skies to illuminate the earth in his selfless light. Moments later, the sun broke himself free from the horizon’s band and climbed out from the water, breaking free from the long swim he might have had enjoyed overnight.

The crimson colored sky was slowly turning into one of light orange, which within moments, turned progressively into a lighter shade that mixed with the blueness of the ocean surrounding me. If only it were for some other time, I would have had watched the curtain of sky lining my sight of view with glee rather than the complete fright and regret I was having now. The change in color of the dark water of the sea into a more translucent blue slowly struck out the vastness of my plight into my terrified eyes.

Out of despair I tried to close my eyes, trying to remember about home…………….

Our ride lasted for nearly a quarter of an hour and, when we finally reached the fields, the whole group was awestruck on seeing her seated behind me. Though all we stayed was for less than half an hour in the group’s company, Jennifer seemed to enjoy the time she spent with me. Leaving her outside her home, that night, I enjoyed the first kiss of love in my life.

“Take it as a yes from me for the morning.” she added as she walked back into her house.

Happenings of that night mysteriously altered the course of life for me.

It marked the start of my first relation with a girl, a relation that lasted till the evening of prom. Like it’s said to happen in love, I was living each day as a new page of my life. I started waking up each morning, more to see her brunette haired plush lipped face complete with a nose pierce and two pearl ringed ear lobes than to get complicated with other issues in life.

The shivering had finally ended and the new cause of concern for me was in keeping my head above the increasingly high swell. I was too much involved in the struggle to lie afloat that, when I felt a slight contact on the inside of my thigh, my panicked mind failed to register it. The rubs kept repeating, increasing in frequency, and finally I was woken up from my thoughts. Though my first fears were for sharks, the failure to see a dorsal fin breaking the water’s surface gave me an unexplainable sense of relief.

I placed my head under the water’s surface to take a look at what was rubbing itself against my body.

One of the most beautiful sights of a light blue column of immensely deep water, surrounding me, embedding me in a seemingly moving curtain, mesmerized my anxious eyes in the beauty of its plain simplicity. Breaking the curtain of blue was the sight of a silvery white form, which felt more like a piece of silver foil dazzling in the depths.

On careful repeated underwater stares, I finally made out the shape of a fish, around half a meter long, circling itself around me. To my horror, I made out the awful truth that the fish was the one which was rubbing against my body. The only reason for it to maintain a distance from me was the methodical threading of my limbs in an effort to stay afloat.

Staring out into the heaven, looming high above me, I prayed to god for putting me out of my misery as quickly as he could.

Here I was, lying isolated, growing weaker by the second, in an immense column of water, trying to gather enough strength to fight back any chance of drowning when, to add to my utter misery, an enormous fish of unknown type kept circling me in its full hearted effort to peck at my flesh. This was the first time I was experiencing death up-close and, all I could do to keep it at bay was the super-human effort of trying to stay afloat; like an ant fallen into a pond. At least the ant would have something to hold on to but, for me, all I could believe in was a thought for rescue.

One which was growing meaner by the second!

Catherine; as from her own Journals:

Every girl lives with a dream-

A dream to love a boy, marry him, enjoy a full happening life with him and finally, when the time comes, die lying in his arms, the knowledge of having at least some one worthy enough to shed a tear, providing her with an unknown satisfaction.

Lucky are the few who get the sequence right and foolish are the most, who in their own unforgiving ways of life, makes a mess of what were in offer.

Was a mariner and is now a fulll time author. The incidents in the story has a touch of true life experience

Be the first to review “IF TIME COULD WAIT by P.S.Hope” Cancel reply