You are here: Products Ice Hockey Heat: The Collection by Gin LaSalle 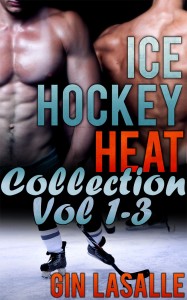 Matt Perriseau, rising star forward of the Flat Top Rattlers, has it all going for him. His pro hockey career is taking off, but sometimes he can’t stop thinking about what he left behind.

Now he has no choice but to face the past when he’s up against his old lover’s team!

On the ice with Jakob Wikstrom in goal for the opposition, Matt finds himself distracted by memories of their secret romance. The tall Nordic god of a goaltender used to set Matt on fire, and the second they lock eyes across the rink, Matt knows that fire hasn’t gone out.

Lovers in secret since their days in junior hockey, Matt and Jake meet up several times over the course of the season, rediscovering each other and reigniting old passions.

I’m a lifelong hockey fan who never quite got over wondering just what all those sweaty jocks get up to in the locker room. 😉 Plus there are interesting issues to explore when considering gay characters in the world of sports. They have to hide their orientation and any potential relationships from not only their families, but their teammates and the media as well.

After twenty minutes of play, the game was tied at nil. Both teams skated off and Matt ducked into the hallway, marching toward the locker room. He was satisfied with his individual performance, but the Sparrowhawks defense was doing a good job breaking up the play. Too many giveaways on the puck, too many missed passes, the usual complaints.
He could practically hear Coach Leblanc say it all already.
He eased down onto the bench in the visitors’ locker room, pulling off his helmet and dousing his face with water, which sluiced through his thick curls and down along his neck. He mopped his face with a towel and listened as the coach started up his summary of the first period’s action.
Mentally, he found himself retreating again.
What was Jake up to, he wondered. Wikstrom wasn’t the type to sit back on his laurels and relax after one period of good play. After all, there were still forty minutes to go, and a nil-all score just meant that allowing even one goal could be the difference between victory and defeat.
He remembered Wiks’ funny little locker room rituals, how he’d slip his earbuds in and zone out to weird, bass-heavy trance music for the entirety of the ten minute break. He didn’t like to be interrupted, even by Matt.
Wonder what he’s listening to now, he thought. The break passed by in a blur and before Matt knew it, they were heading back out toward the ice.
The second period started off just like the first: a lot of dump and chase, a lot of missed connections, no real offensive momentum for either side. But with five minutes on the clock, the Rattlers caught a lucky break. Deep in the Rattlers’ zone, a ‘Hawks player fired off a pass that went astray. Before the Sparrowhawks could reform and regain control of the play, one of Matt’s linemates, Farris, was racing up toward the goal, flanked by only one defender.
Legs pumping hard, Matt raced down toward the other end of the ice, where Wikstrom lurked in net, waiting.
Cornered by the ‘Hawks defender, Farris whipped the puck backward to Matt, who approached the net at an oblique angle, looking for an opening. Jake was looking right at him. He couldn’t find a good angle for a shot, so he fired back to Farris and then closed in on the defender nearby. He had his back turned to the goal, crowding up into the defenseman’s space, when he heard the ping behind him and a small smattering of cheers.
Goal for the visitors!
Matt’s teammates swarmed together for the customary hug, and through the maze of white jerseys and gloves and sticks, he caught a glimpse of Jake glowering toward them.
The goaltender pushed his mask up, sweaty blond hair plastered to his brow, and snagged his water bottle off the net. He took a deep swig, head thrown back, exposing just the top of the slender column of his neck…
Matt had to force himself to look away, the image burned into his eyes as he skated back to the boards to fistbump the guys on the bench.
The last year of time and the rigours of professional training had honed the angles of Jake Wikstrom’s face, lent him a mature, almost aristocratic profile. He’d always looked like that–tall, stately, Nordic even as a teenager–but he was nothing short of gorgeous now.
Matt Perriseau sank onto the bench and licked his lips, fiddling with the tape at the end of his stick. He couldn’t get that picture out of his head and he felt an uncomfortable stirring in his cup. Jesus, if this wasn’t the least appropriate time for that.

Be the first to review “Ice Hockey Heat: The Collection by Gin LaSalle” Cancel reply