You are here: Products I Was Spanked by the Doctor by Diana Kildare 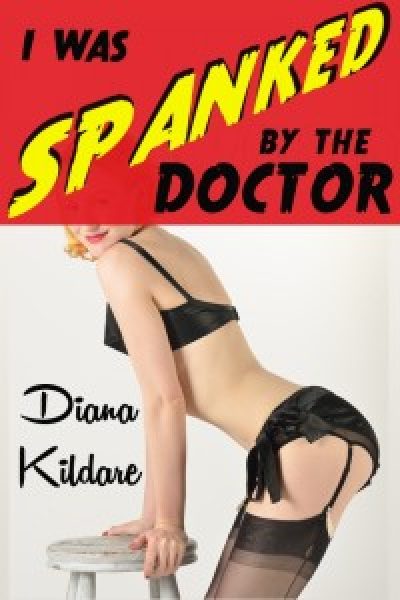 I Was Spanked by the Doctor by Diana Kildare

He grabs my chin in his hand and leans down to whisper in my ear. “I think you like danger. I think you’re a bored rich girl who likes to be shocking.”

Gina started a fake diary to throw her overprotective parents off the trail of her sexual adventures. But even the tame entries she makes up are too much for them and they send her to see Dr. Madison. They hope he will give her guidance in the permissive youth culture of 1966. Instead, he gives Gina the discipline and danger she secretly craves.

My parents are crazy. I know, all teenagers think that, but I know I’m right. You think yours are nuts? Do you keep a fake diary to throw them off the scent of the real one because you know they’ll snoop and at least this way the evidence they find isn’t all that bad? I do, and they did and now I’m headed to a doctor’s appointment. Oh, that doesn’t make sense? No, it doesn’t, because, like I said at the outset? My parents are crazy.
So here’s the scoop: I’m an only child, my folks were past 40 when I was born so I was this longed-for, prayed-for gift. They were, of course, very protective. I’m almost nineteen years old and I’ve never had a bicycle because they were convinced I’d just get hit by a car. I was allowed roller skates, but I could never leave our driveway. I have never been allowed to just walk around the neighborhood with my friends. I have to live at home and go to San Francisco State because they wouldn’t let me go away to college. And of course I’ve never been allowed to date.
Now, that’s not to say I haven’t dated. I’ve also spent plenty of time wandering the neighborhood. I can also probably roll a joint faster than Bob Dylan. But they don’t know any of that. They didn’t want me to even stay overnight at friends’ houses and I missed a lot of pajama parties. But finally, a couple of my friends’ parents actually came over to our house to talk to my folks and convince them to let me stay over now and again. Once that precedent was set, I was able to have a sleepover almost every weekend.
In high school, we all took turns hosting fake sleep overs. Whoever was the host had to stay home and grab the phone if it rang to assure our parents that we were, in fact, just down in the rec room. Oh, sorry, she’s in the bathroom, is it important? Okay, great, I’ll tell her you called. Bye, Mrs. Fisher! Meanwhile, the rest of us took the bus in to the city. We’d sleep out under the stars in Golden Gate Park with the real hippies. They’d share their reefer, we’d share homemade cookies or money we stole from our folks. And if we didn’t have money or cookies, a blow-job is always good currency. Worked like a charm. For years.
I’m not sure what first made them suspicious, but I caught them snooping in my room one time. When I came in they both acted really guilty and my dad said, “Oh, uh, I was looking to see if you had borrowed my sweater again.” Right. And you needed backup from Mom. But I let it go because being a Good Daughter goes a long way toward getting me back out under the bushes with some runaway from Michigan. After that, though, I started keeping a fake diary.