You are here: Products I Spy the Boy Next Door by Samantha Armstrong 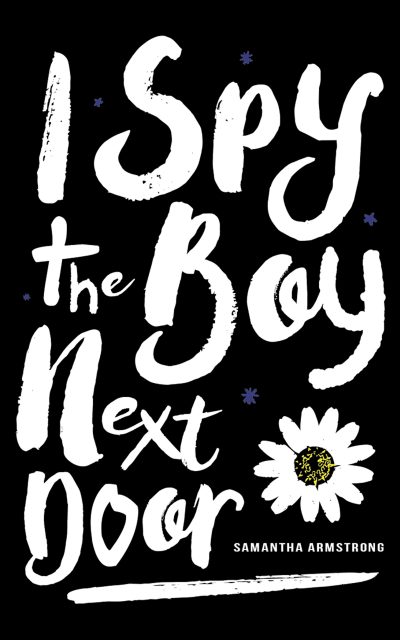 I Spy the Boy Next Door by Samantha Armstrong

Four p.m. spy sessions are the highlight of Mallory Taylor’s day. Observing the boy next door—one with a body and an attitude to match—has her perched beside her window so often it can’t be healthy.

When she finally convinces her mom to let her go to public school, Mallory comes face to face with her neighbor, Troy Parker. And he makes it clear he wants nothing to do with her. His rejection awakens a newfound tenacity and maybe even a touch of recklessness. But when Troy starts to show up when she needs him the most, Mallory can’t help but wonder if there’s more to him than he’s let on.

Taking chances, breaking rules, and following her heart is all new to Mallory. And no one warned her just how fickle hearts can be. When she discovers that Troy isn’t at all the guy she imagined him to be, secrets rise to the surface that will change her life forever.

I'm from New Zealand. I have a 1-year-old boy, and I'm married to the man of my dreams. My days are filled with play dates, house work, and searching for time to write. 😉

I really don't know how ideas come to me. But they do, and I just roll with them.

This book releases on May 25th. So there is no Amazon page yet.

***I apologize for the formatting. It's not like this in my book, I swear!***

The social suicide of homeschooling has produced a homebody whose life has been replaced by books and romcoms. All of which are full of happily-ever-afters, which may have quite possibly ruined any chance for a healthy relationship in my future.

Nic: First of all, high school isn’t at all what it’s cracked
up to be. That shit doesn’t happen. Romance isn’t so cliché.
It’s cutthroat, just like two-faced bitches—that’s the only part
that’s real.
Nic: And second, your mom isn’t going to let you go to public
school.

But she ​has​ to.​ I’ll be eighteen in a couple of months, and I’m sure she wouldn’t want to ruin the last bit of time she has left as an authority figure by denying me my one and only wish.
I didn’t just learn the ways of romance from devouring novels and movies; I learned the inner workings of a troubled teenager’s mind. If you don’t get your own way, rebel until you do. Top tip, if you ask me.

Me: You just wait.
Nic: I think I’ll be waiting forever.
Me: Can’t you give me a little confidence?
Nic: Sorry, someone has to slap some reality into you.
Me: I can’t help that I’ve been sheltered my entire life.
#homeschoolproblems
Nic: Well, for your sake, I really do hope you can convince
her because then you might wake up to the real world.
Me: Ouch. Sometimes you can be kind of bitchy.
Nic: I’m just preparing you.
Me: Sure you are. Well, I’ll keep you updated. Tonight’s the
night I’m either celebrating or coming up with an evil plan to
be the worst teenager alive.
Nic: See you on the other side, my friend.
***