You are here: Products I, Reader by Jane Geneva 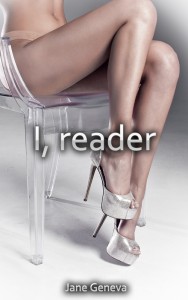 I, Reader by Jane Geneva

Zoe was 35 when her husband left her, and she forgave him. She knew that a 35-year-old man needs a 20-year-old girl more. Someone like the one he dumped her for. And that was mutually good. A girl in her twenties needed a tender lover, not the one in her age, who wants to spend his inexhaustible energy on her all day.

Zoe forgave him because she also knew that it was more natural for her to be with somebody in his twenties. She needed that somebody who would spend his inexhaustible energy on her all day.

It was true, sex-wise. Everything else was hypocrisy. And Zoe was all but that.

But, after her divorce, it was not easy to find someone for a real emotional relationship. Especially not the one in his twenties.

And then Jonathan came back to the neighborhood. Zoe has borrowed an erotica book once from him. But he never dared to come and claim. Now is the time to take it back. But when some books are opened, they can’t be closed unread.

Will they be able to live by the book?

Optimistic about the past. She lives in Europe and never gets bored of traveling.

Be the first to review “I, Reader by Jane Geneva” Cancel reply