You are here: Products Hunted by Arwen Chandler 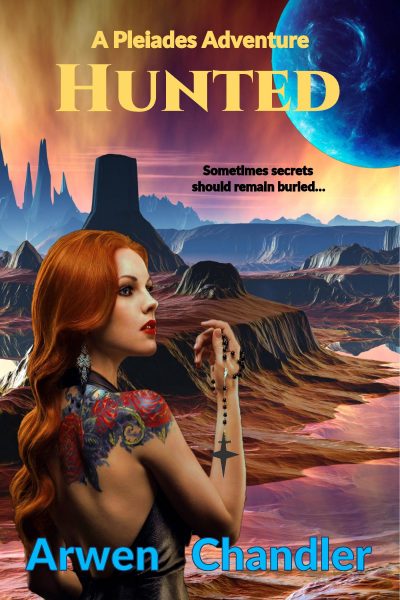 “A blend of Dan Brown storytelling with Michael Crichton action…”

Sometimes secrets should remain buried.
Babylonia Steele has spent her life digging in the dirt looking for artifacts, but no dig has ever been as important as the one on Mirada. Her findings could shake the very foundation of the planet’s government.

A tip from a traitor in her inner circle has alerted the Militarian authority, and it seeks to stop her at all costs. Fortunately for her, her closest friend just happens to be Gwyn Casteliano, the best smuggler, and pilot in the quadrant.

In a life and death chase, she will risk all to protect her findings.

Will the government destroy her?

Will she lose everything beneath the Metreskan sands?

Hunted is the third book in the series, Pleiades Adventures.

Arwen Chandler is a fantasy, science fiction, and urban paranormal author. She is a huge fan of Marvel, Firefly and Indiana Jones. She is also a hopeless romantic who is married to her best friend. Together they have three children.

This is the third book in the Pleiades Adventures. I began with Plundered, which is actually a short story that takes place between Coerced and Hunted. I wanted to write a story about a female space pilot, who had a love for art (she's a smuggler) and had a romantic interest with a Militarian bad boy. Hunted came about because I had to write a book about a female Indiana Jones type, and honestly, it is full of non-stop adventure, and sweet romance.

Babylonia ended the call and leaned back in her chair. She shut her eyes and focused on her ship’s environmental program. The melodious warble of bird calls and the cascading sound of a babbling brook filled the cabin. The sweet mountain air programmed into her internal atmosphere swept across her bare flesh. Her skin raised into thousands of little goose bumps, but after the heat of the day, it was a welcome feeling, so she resisted the urge to grab a blanket. Babylonia stretched her long legs and sunk deeper into the lounge. Soon, the rhythm of her breath kept time to the gentle hum of the machinery in her cabin, lulling her to sleep. As she dreamed, the land outside grew dark and purple.
The loud thrum of helocruisers and sirens pierced the quiet. Babylonia thought she was dreaming, but as the sounds intensified her cabin shook. She bolted upright. “Crap!” Babylonia threw on her silky kimono styled robe, slipped her bare feet into her boots and rushed out the door.
Green, purple and silver lights flooded the dig site as Militarian troopers stomped across her newly excavated field. Their boots smashed through gridlines and trampled artifacts like they were debris left over from a space fight. A large man stood next to her command tent dressed in black combat fatigues. He barked commands to men who were dumping her findings and paperwork into large black bags.
Babylonia took off at full speed. Her lean body unusually fast for a woman of Old Earth descent. Babylonia bowed up to the man in charge. “What do you think you’re doing? This is a dig site authorized by the Metreskan Heritage Council. You have no authority here.” She poked him in the chest with her long finger. “You need to leave. Now. Put my things down.” He pushed forward, and she stumbled backward, barely regaining her footing.
He shoved a paper in front of her face that bore the Militarian seal.
She scanned it. “This can’t be!”
The soldier read it aloud. “Dr. Steele, you are accused of digging without a permit, and profiteering.” He pushed Babylonia into a chair. “We are removing the contraband, and if you’re quiet, I’ll let you go with a warning.”
“Let me go with a warning!” Babylonia snarled. “I’ve got all of my permits. Everything is in order, and you have no right to interfere with this dig. Who do you think you are?”
The soldier smirked. “Someone who doesn’t answer to a little girl like you. If you have your permits, let me see them.”
Babylonia glanced across the tent. A man dressed in similar fatigues was carrying a large box of paperwork back toward his ship. She frowned. “I had paperwork, but your man just took it.” She pointed in his direction. “See that man there. If you could just stop him. He has my papers.”
“So, you’re telling me that you don’t have a copy of your permits with you?”
She groaned, her breath exhaling with an exaggerated sigh. “Yes, that’s what I’m telling you, but they’re in that box. If you’ll just let me get them.”

Be the first to review “Hunted by Arwen Chandler” Cancel reply