You are here: Products How I Became a Vengeful, Psycho Killer by Laura Becker 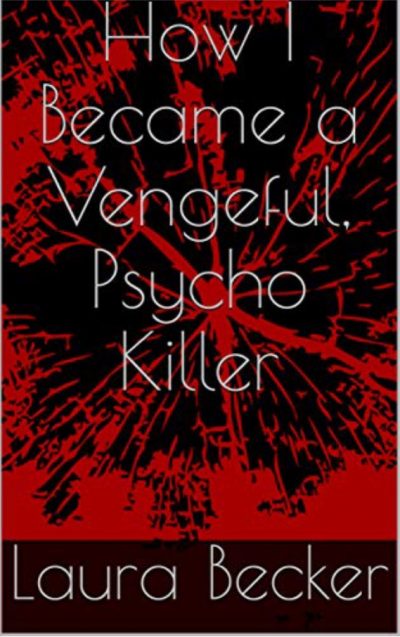 How I Became a Vengeful, Psycho Killer by Laura Becker

Dava never expected to find herself staring down the wrong end of a revolver in the prologue (or is it chapter one?) of a heart-pounding psychological thriller. But now that she has, there’s just enough time for an obligatory flashback to reflect on just how she got here before the gun goes off. How I Became a Vengeful, Psycho Killer is a suspenseful, sexy, self-aware thriller that knows the rules and plays by them all; with a surprise ending even the genre archetypes who populate this story don’t see coming. Sex, secrets, stalking, obsession, jealousy, mystery, and murder all converge on the life of 18-year-old Dava and everyone’s a suspect. Her not-so-loyal family, her so-called friends, her dangerously-jealous boyfriend, the intriguing femme fatale, and a fling from the wrong side of the tracks. But will she survive and make it to those two glorious words “the” and “end” to tell her own tale or will the epilogue hold a darkly satisfying twist?

Laura Becker is an essayist and novelist with a B.A. in communications from Iowa State University. She honed her storytelling craft at The Second City and Improv Olympic. She lives with her husband in Redondo Beach, California.

Born in Missouri. Raised in Kansas. Adolescence/young adulthood in Iowa. According to Walter Neft, DOUBLE INDEMNITY (1944), that makes Laura a native Californian. She writes, quips, muses and laughs about almost anything…almost.

PROLOGUE OR CHAPTER ONE…IT ALL DEPENDS
What makes someone a vengeful, psycho killer? Now I know.

Taking away your options one by one, day by day, moment by moment until you have nothing left.

Staring down my fate at the wrong end of a revolver, I have run out of them all. And as my mind flickers with the first frames of an obligatory flashback, ice-cold clarity chills my veins. This is not the end, but only the beginning. The beginning before the beginning.

My retrospective opening that was never meant to be a heart-pounding prologue to a twisted turning point. No, it was supposed to be chapter one of a romantic novel. One of reminiscence and regret for lost love that was short lived and couldn’t last. Not a guilt-filled soliloquy in the harrowing last moments before a violent act of jealousy and revenge. Not the kind that always starts, “It wasn’t supposed to end like this.”

It wasn’t supposed to end like this. I wanted to be the good girl. And it looked like I would be . . . for a time. I started out as the one with the perfect boyfriend, the popular friends, and the prominent family. The one who lived in the nice neighborhood with old money and new cars, with private gates designed to let the right people in and keep the wrong people out. The one with the friendly face and pleasant personality. Life was supposed to be my oyster, filled with silver spoons and scholarships and strings pulled by old family friends. My life was supposed to be a fairy tale, not a cautionary one. But we don’t choose our genres or our endings, only the way we tell it. So, listen closely, because none of us expects to find ourselves in a suspenseful, sexy, psychological thriller. But if you do, you might learn enough to make it to those final glorious words “The” and “End” without as much trauma, aftermath, and epilogue.

I’ll admit I’m not completely innocent in all of this. It all started, as these narratives typically do, with a simple mistake, a questionable decision. I’ve made thousands of choices in my life, most of them sound. Who should I date? What should I wear? Where should I go to college? All of them, across the board, stellar decisions. Gold star, straight A, aced-my-SAT decisions.

Why did I do it? There was nothing in my past that would have suggested I would act so impulsively, so out of character. No first domino that sent the rest tumbling down. No spark that started the fire. I just did it. And I wish I could take it back. But, trust me, there are some things you can’t change, no matter how much you may want to.

I’ve thought of every excuse, the reasons why it might have happened. The argument with my boyfriend that made me angry. My friends who took off early that night and left me alone. My parents who didn’t give me enough attention.

But I really did it because I could. Because I had a window of opportunity. Because no one would ever know. Because he kept following me that night at the pier, the carnival blaring in the background, ignoring his friends and flirting with me. Because he made me laugh, and showered me with compliments, and bought me things. Because I liked the way he looked at me, his eyes tracing my curves, as if he could see straight through my designer labels and private school education.

Afterward, I played the memory over and over in my head, like the steamy scene of a favorite movie. Alone in my room. Lights out. The world asleep. My elastic waistband tight against my wrist.

Sometimes I viewed the scene one frame at a time, watching it all in slow motion from every angle. I marveled at his confidence. How easily he unclasped my belt. How swiftly he untucked my shirt. How quickly he unhooked my bra. Like he’d done this a thousand times with a thousand other girls.

Sometimes I lingered over the sensations. The softness of the blanket he spread on the beach. The strength of his grasp as he pulled me to the ground. The warmth of his hands against my cool skin. The way his muscles moved as he shrugged off his shirt. The thrill and anticipation when he whispered what he was going to do.

And it might have been left at that—a meaningless fling, a moment of weakness—with the stars glittering above and the ocean waves providing the soundtrack. Just a vivid fantasy to be relived again and again in the middle of the night in my own bed. But not every tale has a happy ending. And, sometimes, you have just enough time to run your heart over the razor’s edge of regret. To reflect on exactly how you got here, right before the gun goes off.

Be the first to review “How I Became a Vengeful, Psycho Killer by Laura Becker” Cancel reply