You are here: Products House of Cards, Thief of Hearts by Brooke Burton 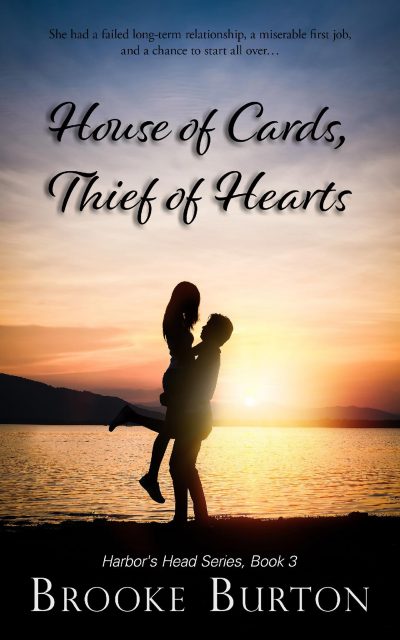 House of Cards, Thief of Hearts by Brooke Burton

Jamie had no desire for romance after being burned by her ex-boyfriend. Yet when she starts seeing the ever handsome Chris volunteering each week, there’s something about him that sneaks under her radar. As their friendship moves to another level, before she knows it, she is a woman in the midst of a classic summer romance.

But Chris isn’t without his secrets. From the moment he met Jamie he had begun leading a double life that tripled and quadrupled in complexity as time went on. Chris begins to fall hard for Jamie, making his secret even more agonizing. If he comes clean there’s a chance that she’ll leave him. However, with the threat of his secret being exposed, would there be any chance that she would ever love him enough to forgive him?

Brooke is a tortured artist who began writing plays in the 3rd grade. After losing her muse as a teen, she struggled for years to write, but what came out on paper never aligned with what was in her heart. Finally, after being inspired by some old friends, her writing came to fruition which became her first published novel, Desperate Times, Second Chances.

Inspired by strong women who have a driven purpose and very little tolerance for bull, she enjoys exploring equality in relationships with broken characters who clearly have made past mistakes. Don't we all?

Jamie is the youngest sibling in a family of 3, and I'd written about her other 2 older siblings in the series. Her story was hard to tack down, but we worked it out. 🙂

“There, that’s better!” Jamie said, snapping Chris out of his reverie. He watched her put a few final stirs into the sauce. “Do you want to try it?” Chris nodded, eagerly. She grabbed a fresh spoon, dipped it into the sauce, and came over to where he was seated across the bar. She held out the spoon for him as he sipped the sauce off it.

“Wow! That’s unbelievable!” Holy God was it good. Whoever said the way to a man’s heart was through his stomach wasn’t lying.

“You like that, huh?” She teased, lowering herself to his eye level.

He grinned back. “Oh yeah,” he said, teasing her back. She let out a little moan as they kissed over the spoon she still held. However, in true Jamie form, she lost herself in Chris and completely forgot she was holding a spoon covered in tomato sauce. Something happened to it, not anything she could really retrace given the comedy of errors that ensued. But it dropped, hit the counter, and a wave of tomato sauce came off the spoon splashing everything in its path. Lucky for her, she had her trusty apron on. Unlucky for Chris, however, the tomato sauce splattered completely across his stone blue t-shirt.

“OMG, I am so sorry!” Jamie said, absolutely shocked.

Chris looked down at his shirt. He looked like an extra in a horror film. “It’s okay, it’s just a little sauce,” he said, trying to make her feel better.

“No, it’s going to stain if it stays on,” she said, coming around from her side of the bar. She grabbed his hand and led him straight off his stool to the bathroom. She started filling up the basin with the hottest water she could draw. “You’re going to have to soak it, to start,” she instructed, reaching under her sink for her favorite miracle stain killer. “Soak it in the water for a few minutes, then spray this on. Then rub it in and rinse it hot and keep doing it until the stain is gone. It should work pretty quickly where the stain is still wet.”

“Take my shirt off?” He grinned at her. Forget about a wave of emotion, she felt like a typhoon of emotion had landed on her at that moment. The humiliation of being so clumsy, the dread that she may have ruined his shirt, plus the very idea of him without his shirt on. Could her heart beat any faster?

“I borrowed one of Scott’s shirts the other weekend, let me go find it,” she said, taking a quick exit out of the bathroom. Chris continued to grin at her, giving her his all-knowing eye cock as she left. Dear God, could she be more embarrassed? Jamie made haste across her living room, trying to recollect where she put Scott’s shirt. Thanks to finger painting with June-Bug a couple of weekends ago she’d needed to borrow it while Mallory gave her own shirt a wash. Remembering it was on a shelf in her room, she made her way toward the stairs when she heard a knock on the front door. She stopped, thinking it must have been in her head, or maybe Chris knocking things around in the bathroom? She heard it again.

“What the . . .?” She said out loud, wondering who on earth could be at her door on a Monday evening. Stepping back down off the stairs, she hurried to the door. Of all the damn timing!

Be the first to review “House of Cards, Thief of Hearts by Brooke Burton” Cancel reply