You are here: Products HOTWIFE: Taken in the Boardroom While My Husband Watches by Nina Sparks 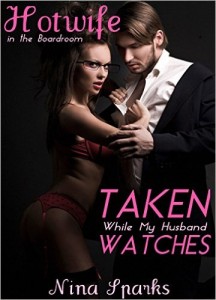 HOTWIFE: Taken in the Boardroom While My Husband Watches by Nina Sparks

“My husband’s biggest fantasy? To see me ravished by three of his colleagues – at once.”

Rob and Anya have a wonderful marriage, in the bedroom and beyond. They are more than husband and wife; they are best friends. But when Rob starts a new job, Anya notices changes in the man she thought she knew. Turns out that Rob’s company has a peculiar corporate culture – one that includes associates and executives “sharing” their wives with one another.

Nina Sparks is a part-time English teacher, full-time cat-person and loving wife to a fulsomely bearded man. When she’s not working or writing her steamy tails, she’s usually curled by the fire with a furry loved one – equal chance that it’s the cats or the husband.

My own fantasies, first and foremost – mingled with just enough real life to make it interesting. The husband in this story, “Rob,” is modeled closely off of my own man, from his physical characteristics to his passions and appetites. But in real life, he’d never let me near his coworkers – probably because of the wildly inappropriate professional consequences! This being fiction, however, mixing a little business with a lot of pleasure was too tempting to resist. The events described in this book are basically an idealized version of what I’ve daydreamed of doing so many times: showing up at my husband’s office in nothing but a trench-coat and heels, and letting his colleagues ravish me. I hope you enjoy reading it as much as I enjoyed writing it!

Chapter 1
Shared Wife: An Indecent Proposal
He’s always loved to take me hard – in part because I love it so much. We’ve been married more than a year already, but he always manages to surprise me, to catch me when I’m least expecting it – with a grope or a grab, sometimes just a light touch or nothing more than a flash in his black eyes – and before I know it, I’m melted in his arms, giving way and giving in and loving every second of it.
Since he started his new job last month, though, things have gone to a whole new level. I don’t know how to describe it – and it goes beyond the bedroom. In every part of his life, it seems, Rob has become more brazen, more aggressive, more willing to take whatever wants, whenever he wants, however he wants. Whether it’s the last slice of pizza at our neighbours’ movie nights, or the vintage motorcycle he bought himself with his signing bonus – or even last week, when we were out to dinner at a gourmet restaurant, and he reached right across the crystal candlesticks to kiss me and fondle my breasts – right in front of our fellow diners and the waitstaff and everyone!
Brazen, like I said – bold near the point of recklessness – and, apparently, a huge turn-on for me. He’d always been confident, always strong and sexually forthright – but this new side of him was something I’d never seen before. It was if he were writing his own rules now, and trusted himself with just about any risk. And I’d be lying if I said that the change wasn’t evident in our sex life. He’d always used to joke that I was his “trophy wife” – though I’m only a few years younger than him. Now, he was treating me quite literally like a prize that was his to enjoy and do with whatever he wished – and I loved it.
“This new job has instilled some kind of beast in you,” I’d observed last week before bed, after he’d publicly manhandled me at the restaurant and wound up taking me hard, flat on my back, in the foyer the moment we’d gotten home.
We were still lying together on the rug, naked except for my stockings and his work shirt. I drew my fingers up along the glistening bulges of his triceps and planted a series of little kisses down his neck and along his sternum.
“I’m not complaining,” I assured him when he chuckled. “I’m just wondering what’s gotten into you lately. Is it that you’re earning more now? Or – do your new colleagues have some kind of contest to see who can make their wives blush and cum the most times in a week?”
. . .
He sighed and rolled off of me, so that we were lying side-by-side on our hallway’s soft shag rug. He took my hand, which had been resting on my stomach, and brought it to his mouth, kissing my knuckles one by one. I looked over at him from the side of my eye, and knew from his mischievous smile that he was figuring out how exactly to word something. I squeezed his hand, nestled my cheek into the crook of his armpit, and waited.
“Sometimes,” he began finally, after heaving a little sigh. “Sometimes, some of the guys – in a lot of the teams, actually, but definitely in my engineering group – sometimes they get together with one of their wives and – and they share.”
I gasped and let my mouth hang open. There were no words. I widened my eyes at him and sat up just a bit, to get a better look at his face and see if he was serious. He couldn’t be! Could he…?

Be the first to review “HOTWIFE: Taken in the Boardroom While My Husband Watches by Nina Sparks” Cancel reply