You are here: Products Hotshot Danger: Packing the Heat by Jacquie Biggar 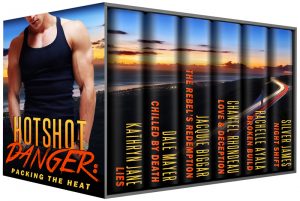 Love and Suspense, Heart-pounding romance and thrills in one hot package.

Hotshot Danger: Packing the Heat – 6 full-length action-suspense romances plus one bonus novella from bestselling and award-winning authors. Danger and excitement, secret agents, sexy SEALs, bikers, undercover operatives, and heat! What more can a woman want? Get yours today before it goes away. LIMITED TIME ONLY.

Jacquie lives in paradise along the west coast of Canada with her family and loves reading, writing, and flower gardening. She swears she can’t function without coffee, preferably at the beach with her sweetheart. 🙂

We are a group of romantic suspense authors who love to write stories where the H/H have to overcome seemingly impossible odds in order to reach their happy ever afters.

Book #1: Lies by Kathryn Jane
When Jake Meyers is hired to find a missing, million dollar racehorse, the first brick wall he comes up against is a sexy, kickass woman with inside information she’s refusing to share. The sparks and heat between Jake and the mysterious Tara are more than either one of them bargained for, and sooner than later, lives will be hanging in the balance.
Book #2: Chilled by Death by Dale Mayer
Stacy Carter returns to Blackcomb Mountain where she lost her best friends to an accident. Former bad boy Royce Bronson can’t believe she’s back. He has a lot to make up for—maybe this is his second chance. The holiday atmosphere quickly shifts when they find a dead man. Then one of their own goes missing… It will take everything Stacy and Royce have to make it through this nightmare…. They can’t trust anyone – maybe not even each other…
Book #3: The Rebel’s Redemption by Jacquie Biggar
Is it ever too late to atone for past mistakes? When an old enemy follows and causes mayhem in the small town of Tidal Falls, can Jared Martin overcome the odds to protect the woman he’s always loved and the child he never knew, or will it be too late for redemption?
Book #4: Love & Deception by Chantel Rhondeau
What if everything you believed in was a lie? Nick Kendall is a secret agent sent to infiltrate a suspected terrorist organization. Despite his best intentions, he falls hopelessly in love with Carlie Hollis, an alleged key player of the group. Though he knows it’s wrong, Nick struggles with his feelings versus what is right. Everything changes when he receives new orders—kill the target. Will he follow those orders…or become hunted himself?
Book #5: Broken Build by Rachelle Ayala
When a woman wrongs a man… can a man forgive and love? The most horrible thing Jen Jones has ever done is behind her—or so she thinks. When she falls in love with Dave Jewell, the man whose life she ruined, a gang of thugs and a killer expose her secrets. Can Dave and Jen rescue an innocent victim from their past and hold onto the love that blossoms?
Book #6: Night Shift by Silver James (Finalist in National Choice Awards – Erotic Romance)
Everybody knows you don’t mess with a big, bad Wolf. Well, everyone except Samantha “Sam” Prescott. She’s on a mission to retrieve her niece and nephew from the Nightriders Motorcycle Club where they are being protected by Elijah “Easy” Cross, an outlaw biker—and a wolf shifter. Sam didn’t count on Elijah’s stubborn promise to her murdered sister, and neither can she escape the sexy biker with boy-next-door dimples and killer instincts. When the moonstruck Wolf claims her for his mate, her instincts scream, “RUN!” But how can she, when her hormones want to get down and dirty with the only man who can keep the children safe?
Bonus Book #7: Remember the Night (A Nightrider MC novella)
If a Wolf plays his cards right, he might get lucky in love… Ten years ago, Lucas “Lucky” Malone ran from charges of murder, leaving behind the girl destined to be his mate. An accident brings them together, but an MC war is brewing and the last thing Lucky needs is to take a gamble on the one woman guaranteed to make him howl at the moon. How can this moonstruck Wolf walk away from her a second time?

Be the first to review “Hotshot Danger: Packing the Heat by Jacquie Biggar” Cancel reply