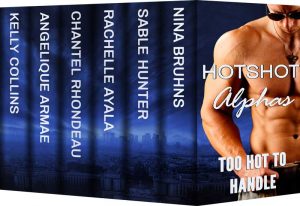 Sable Hunter is a New York Times, USA Today bestselling author of nearly 50 books in 7 series. She writes sexy contemporary stories full of emotion and suspense. Her focus is mainly cowboy and novels set in Louisiana with a hint of the supernatural. Sable writes what she likes to read and enjoys putting her fantasies on paper. Her books are emotional tales where the heroine is faced with challenges. Her aim is to write a story that will make you laugh, cry and swoon. If she can wring those emotions from a reader, she has done her job. Sable resides in Austin, Texas with her two dogs. Passionate about all animals, she has been known to charm creatures from a one ton bull to a family of raccoons. For fun, Sable haunts cemeteries and battlefields armed with night-vision cameras and digital recorders hunting proof that love survives beyond the grave. Welcome to her world of magic, alpha heroes, sexy cowboys and hot, steamy to-die-for sex. Step into the shoes of her heroines and escape to places where right prevails, love conquers all and holding out for a hero is not an impossible dream

From Sable’s HOT ON HER TRAIL
Halfway through the hayride, the wagons pulled in a circle around a campfire so that anyone who wanted to could roast a wiener or melt some marshmallows to make s’mores. Most everyone had already filled up on BBQ and snacks back at the pavilion, so they grabbed a beer and enjoyed the fire. Not Jacob and Jessie. Jacob decided to take total advantage of their chance to be alone.
Reclining in the hay, he unbuckled his belt and unzipped his pants, easing his jeans down over his hips so that he would be ready for action when the time came.
“Undo your shirt, too, Jacob. I want to be able to feel your naked chest against my back.” In one ripping motion, he opened the shirt from top to bottom.
“Come to me, Doll-Face.” She scooted back into his widespread legs. Before she lay back, he pulled her dress down to her waist. Braless, she settled back in his arms and he spread the blanket over them until they were only visible from the neck up. When his palms covered her breasts she moaned at the welcome sensation.
“Oh, I like this, Jess. I have everything I desire right at my fingertips.”
And, God Almighty! What those fingertips could do! He played her breasts and nipples like a fine instrument. Jessie writhed with pleasure in his arms. Turning her head, she sought his mouth with her own. With love in his eyes, he gripped her chin and cheek and let his lips descend. Jacob’s tongue swept into Jessie’s mouth, dueled with hers and then wrangled it into submission.
He couldn’t believe the dream that he held in his arms. Pulling her dress up above her hips, he smiled when he found she was wearing one of the little thongs he’d bought at the boutique. Jessie spread her legs, indicating to Jacob her complete surrender. Just a touch, that’s all it took. She was so in love with Jacob, all he had to do was run one hand across her waist and she opened, blossomed, and wept for him. Raising her hips to meet his claiming, she cried her relief when he began to play with her pussy. Fire burst from the places he touched, and her vagina pulsed and ached, begging to be invaded, conquered and claimed. Jacob pushed two fingers into her tender vaginal opening, and she exploded in his arms.
Jacob held her – God, he loved her. She pushed back on him, burrowing into his embrace as he rubbed her little clit with one hand and teased the perfect pale globes of her breasts with the other. “Stay with me now, Sweetheart.” Some of the guests were drifting back to the wagon, climbing in with cups of coffee and hot chocolate. Speaking softly, he asked. “Can you pretend we’re not fooling around?”
“I think so.” She didn’t sound completely sure.
“I like to live dangerously,” he teased. “Let’s risk it.” Lifting her under the arms, he scooted her up the scant inch he needed to push his cock up into her eager canal.
“Jacob!” she exclaimed, in the most modulated voice she could manage. Several eyes turned to look at her. “Isn’t it a beautiful night?” she tried for a lame save. Jacob’s chest vibrated with barely concealed mirth.
“Indeed it is, Ms. Montgomery. It’s a fabulous night.” Underneath the cover of the hay and the blanket, he began flexing his hips upward, stabbing her with short, hard strokes.
She braced her feet on his legs, allowing him to control every aspect of her body and their joining. “Is this good, Jess?”
“God, yes,” she whispered. As she lay there suspended in her pleasure, he massaged her breasts, pulling at the nipples. “Rub your pearl, Baby. I want you to cum for me,” he commanded.
“Okay, but I don’t need it. What you’re doing is going to send me into orbit soon enough.”
“Do it, anyway. I can’t last but a few more seconds, it’s too good.” She complied, and soon she was quivering on top of him, desperately trying to be as inconspicuous as possible. Jacob buried his face in her hair. The only way that she knew he came was the change in his breathing and the jets of cum she felt inside.
“You’re good at this,” she mumbled conspiringly.
“Look around.” he chuckled. “We’re not the only ones enjoying each other.” Jessie glanced around and sure enough, several of the couples appeared to be doing more than enjoying the night air.
“Now, I understand the term.” she laughed.
“What term?”
“I believe we’ve had what you would call a roll in the hay?” Laughing he hugged her close, then he cleaned her up with a handkerchief and helped her straighten her clothes. Jessie had never felt so loved.