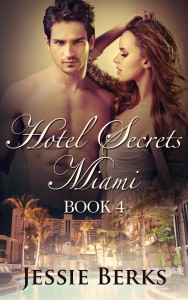 One of the most powerful men in Miami is blackmailing Rebecca. When she journeyed from Ireland to Miami, she had no idea that her life would spin so far out of control. With her brother’s presence to keep her grounded in her roots and her father’s health back on track, Rebecca should be on solid ground. Instead, her mind and heart are a swirl of confusion. With Gabriel’s hatred looming on her mind and Calvin’s distance, she is sure that she is destined to be alone.

But one night can change everything. Rebecca navigates the thin line between love and obsession and finds herself in Grant’s clutches once more. She must decide what is more important to her, her dignity or revealing the truth about Gabriel’s past. With nothing left to lose Rebecca takes a leap of faith. Will she land in shambles or finally, in the arms of the man who truly loves her?

That night as I settled into bed my mind was on Calvin. I was looking forward to starting things up with him again. There was such passion between us, but sometimes it was explosive. I was just curious where it might lead. Maybe if we took things a little slower this time, it would be different.
The curtains in the window drifted back and forth slowly. There was barely enough of a breeze to stir them. The motion was rather hypnotic. I closed my eyes for a moment and then opened them again. The curtains that had been drifting a moment before had been suddenly parted. Perched in my window, as if waiting for my invitation, was a figure. It took only a glimpse of those clear blue eyes for me to realize who it was.
“Calvin,” I exhaled. For an instant I wondered if I was dreaming. Then he jumped down from the window. I sat up in my bed and had barely managed to get to my feet when his arms were around me. He propelled me backward against the wall.
“Rebecca, I want you right now,” he growled. “I can’t wait any longer.”
My back slammed against the wall as he crushed his mouth against mine. Every nerve in my body was screaming his name. The caress of the tip of his tongue was inching me closer and closer to losing control. His hands hard and strong were desperately tugging at my jeans, trying to pull them down from my hip. My heart was racing as things were unfolding so quickly that I couldn’t keep track. But I also didn’t want to. He tore his lips from mine and kissed along the side of my neck.
“Calvin,” I moaned as his fingertips sought the cotton material of my panties.
“Shh,” he instructed and kissed me again, just as hard and deep as he had a moment before. His fingertips worked their way beneath the elastic band of my panties and slipped inside of me as if they had never left. My body trembled with the force of desire that raged through me. My head swam with the anticipation of ecstasy. I couldn’t believe that he was so willing to forgive me.
“Calvin,” I mumbled through his heavy kiss. “Calvin I’m sorry that I didn’t show up at the boathouse.”
He abruptly broke the kiss. His gaze locked to mine. The clear blue shade of his eyes was flashing with darkness as he stared directly into my eyes.
“Don’t,” he warned me. “Don’t mention any of it, understand?”
I nodded silently. His fingers were still stroking deep inside of me. I would have agreed to just about anything with the amount of passion that was building in me. He held my gaze as my cheeks flushed and my hips began to squirm. I kept my arms around his waist and tried to tug him closer. But he refused, his gaze steadily watching as I became more and more aroused by the deepening thrusts inside of me. I closed my eyes briefly as warmth raced up through my body, stealing my breath.
“Calvin,” I breathed. “I need you.”
“You have me now,” he murmured back, his voice heavy with an emotion I couldn’t quite place. “I knew that all I had to do was get rid of him. That was all I had to do to make sure that you belonged only to me.”