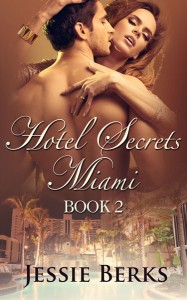 Miami has been like an entirely different universe for Rebecca. Everything is more intense, everything is more urgent. Rebecca learned a hard lesson from a hard man who used her for his pleasure and made no apologies for doing so. But will she learn an even harder lesson from a man who seems to be falling for her? Is there ever a right answer in matters of the heart? Rebecca came to Miami for one reason, to earn the money her family so desperately needed back in Ireland. But all of her attempts to be successful have been derailed by the distraction of two lovers.

Gabriel will never give her his heart, she’s sure of it. But what he does give her is more pleasure than she has ever experienced before.

Calvin will never share her; he wants all of her or nothing at all. With his fiery temper Rebecca knows that she must make a choice once and for all.

As she receives dire news about her father’s health, Rebecca seeks comfort in the wrong places and finds herself in the middle of yet more chaos. Will she find the answer in a proposal that she cannot refuse? Will she find the answer in the arms of lover who is willing to give her all of his affection? In the end, the question may not be whether Gabriel or Calvin can be trusted, but whether Rebecca can trust herself to make the right choice.

Authors are often asked what inspires them to write their books and it’s not a question that has a simple answer. I love writing and telling stories and I also love to sit and watch people that I don’t even know. If I see a couple walking down the street, I can make up an exciting story about them without any detail about their actual lives. I just let my imagination run wild and the story takes on a life of its own. If I had to give a simple answer about what inspired me to write my book it would have to be the love of not just telling a story, but of creating it.