You are here: Products HOT SEALS: Surrender to a SEAL (Kindle Worlds Novella) by Normandie Alleman 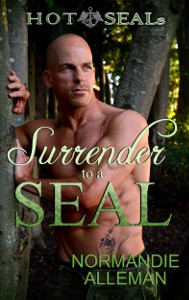 Recently retired Navy SEAL Luke Paulson feels strangely comfortable in a war zone—it’s adjusting to the real world and all its challenges where he falls short. When his sister becomes ill and his mother’s Alzheimer’s care lands solely on his shoulders, Luke needs cash. Protecting an international law student who is as intelligent as she is beautiful seems the perfect fit.

In Washington, D.C., Chief Justice Thornhill is being threatened by a domestic terrorist group, and his granddaughter Charlotte is their target. Initially she seems none-too-pleased with her new bodyguard shadowing her every move, but a night on the town with a few too many cocktails quickly changes the way she views the sexy SEAL.

But when Luke deceives her to get the upper hand, he realizes too late he’s risked losing it all, including the girl who has turned his life upside down by stealing his heart. His toughest mission yet may be convincing her to trust him again.

If there were another 5 hours in the day, Normandie would spend more time needle-pointing, felting, and playing with photography. Instead, she’s a Pinterest addict and sports junkie who lives with her hunky football playin’ husband, a passel of children, and her pet pig who’s crazy for Red Bull.

A story about a secret service man falling in love with the girl he was protecting. I love the idea of true love blooming under dangerous circumstances.

Charlotte eyed Luke with an appraising gaze. For a man whose mere presence made her feel smothered, he was actually quite attractive. It was the morning after Zane brought him to her house to keep an eye on her, and she’d taken him to one of her favorite Georgetown menswear shops for a makeover of sorts. Looking around the store, she found it was difficult to find something that wouldn’t look good on her new bodyguard.
“Try this.” Charlotte handed Luke a dark-blue shirt that brought out the color of his aquamarine eyes.
Her grandfather was under siege from a group of extremists, and she was on edge. At first, she’d hesitated to believe that she was in any danger, but the whole thing made her uneasy nonetheless, which was why she went along with her grandfather’s eccentric wish that she have a protective detail until the crisis was over.
“Really? I was thinking this one.” Luke pointed to a red lumberjack plaid.
She made a face. “Really? Maybe if you were sporting a long beard and man-bun, but I’m not seeing that with this.” She drew a circle in the air pointing at his bald head.
“What? You don’t like the dome?” He was trying to hold back a grin, but it wasn’t working.
“No, it’s not that. It’s just that those two weren’t working together.” In fact, it surprised her how sexy she found his shaved head. To make matters worse, she had an impish desire to touch it—to rub her hand over it, which was completely inappropriate in this situation.
“All right. I’ll try it.” She expected him to take the shirt back into a dressing room, but instead, he simply pulled the shirt he was wearing over his head, revealing the most ripped stomach she’d ever seen in real life. Goodness. She swallowed, and he handed her the discarded shirt. His shoulders were broad and his muscles seemed to have muscles on top of them. In clothes, he didn’t look bulky, but he was definitely well-defined.

Be the first to review “HOT SEALS: Surrender to a SEAL (Kindle Worlds Novella) by Normandie Alleman” Cancel reply