You are here: Products Hot, Rich and Dominant – The Complete Collection by Amy Valenti 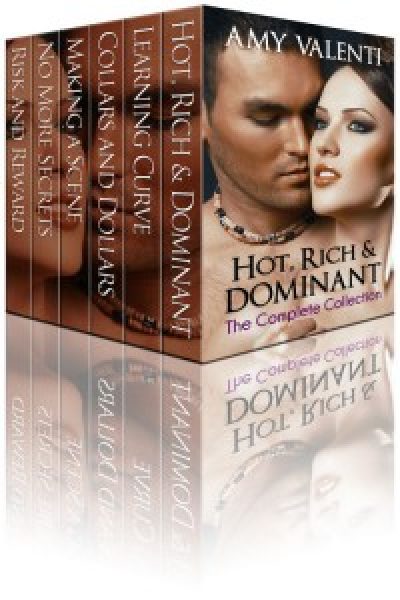 Hot, Rich and Dominant – The Complete Collection by Amy Valenti

When Nell starts her new job with the Cassidy Corporation’s marketing team, she doesn’t expect to give offense to the CEO’s gorgeous, enigmatic son during her first day. Sure she’ll be fired by the end of the week, she instead finds herself pinned to the wall, captivated by his ravenous kisses…

It seems there are two sides to tall, dark and delicious Marc Cassidy, and something in Nell has called the Dominant in him to the fore. He wants her for his own, and he’s not afraid to show her how he can rock her world when he blindfolds, spanks and takes her. Though she tries to resist the intense chemistry between them, it’s not long until Nell is plunged into the heady, unfamiliar world of sexual submission. Marc pushes her boundaries in every area, from crops and canes to bondage and public play. Even as she falls deeply in love with Marc, surrendering every part of her being to him, her new Dom is concealing an unfathomably dark family secret.

When the tension finally reaches breaking point and Marc’s carefully laid plans fall to pieces, Nell must find the strength to demand the same unfailing honesty from her billionaire Dom that he expects of her—whatever Marc’s reaction might be. If she can unearth his dangerous secret, is she strong enough to walk a knife’s edge for love?

She also writes vanilla lesbian erotica (without the romance!) under the pseudonym of Sidonie Spice.

It started out as a bandwagon book – everyone was writing Fifty Shades knockoffs, and I decided to experiment with my own. What I didn’t expect was for the characters to take on lives of their own and demand another 95,000 words on top of the initial 8,000-word story I gave them! The serial grew into something a lot bigger and more complex than I’d originally envisioned, and I’m really happy with the way it ended up. Hopefully readers will be, too!

The maître d’ seemed to know Marc, and he showed us to a table in a shadowy, romantic nook lit by candles. He left us with the menus, and out of habit I looked for prices, but there were none listed—a sign that everything was extortionately priced if I’d ever seen one.
“You know, you don’t have to try to impress me with your wallet,” I said, without thinking.
He raised a brow. “What makes you think that’s what I’m doing?”
“I’m wearing designer dress and sitting at a table at Della’s.”
“I eat at Della’s a couple of times a month, and I wanted to see my new sub in a dress I’d take great pleasure in taking off later. Is that so bad?”
A waiter approached to take our wine order. I left the choice to Marc, and sat there hoping I wasn’t blushing too noticeably at the words ‘new sub’. How had I fallen into this crazy situation so quickly? Was he moving faster than I wanted to go?
I shifted slightly and remembered, for the umpteenth time, that I wasn’t wearing any underwear. That made me blush even more and by the time the waiter had left, I was pretty sure my cheeks were scarlet.
“Relax, Nell.” Marc was smiling, and under the table he brushed my leg with his, just for a second. “I’m not trying to knock all the sense out of your head by showering you with cash. I wanted to eat here tonight anyway, and I wanted you to feel comfortable, like you were dressed for the occasion.”
Part of me melted. It seemed so considerate, so sincere. “Thank you.”
Then I thought about it. Wait a minute… “So how comfortable am I supposed to feel sitting here without any—”
He kicked me gently under the table, his attention fixed somewhere over my head. I shut my mouth immediately as the waiter returned to let Marc taste the wine. He poured a glass for each of us at Marc’s approval.
When we were alone again, Marc leaned over the table, his expression intense. “I said I wanted you to feel comfortable—past tense. When I got there and remembered the hundred and one naughty little things I’m dying to do to you, I couldn’t resist upping the ante a little.” He paused for effect, then shrugged. “You could have said no.”
It was true. I’d protested the first time he’d mentioned it, but by the time we’d been ready to leave the apartment I’d been willing to do anything he’d suggested.
“I’m sure if I have a quiet word with the waiter, he can send someone out to procure some new underwear for you…”
Now it was my turn to kick him under the table. “Don’t you dare!” I hissed—then remembered I was supposed to be his submissive. “Sir,” I added belatedly.
He laughed aloud, as if he were genuinely enjoying my rebelliousness, and took my hand across the table. “You know, most Doms would tan your hide for insubordination.”
“I’m not good at this,” I mumbled, staring down at his fingers entwined with mine. “If you’re looking for Little Miss Subservient, I don’t think I’m your girl.”
It almost hurt to say the words. I wanted to see where this was heading, and to suggest that I wasn’t right for him wasn’t exactly the best way to convince Marc of that. But it was only fair that I was honest.
He squeezed my fingers. “Then it’s a good thing I like subs with a little spirit.”

Be the first to review “Hot, Rich and Dominant – The Complete Collection by Amy Valenti” Cancel reply