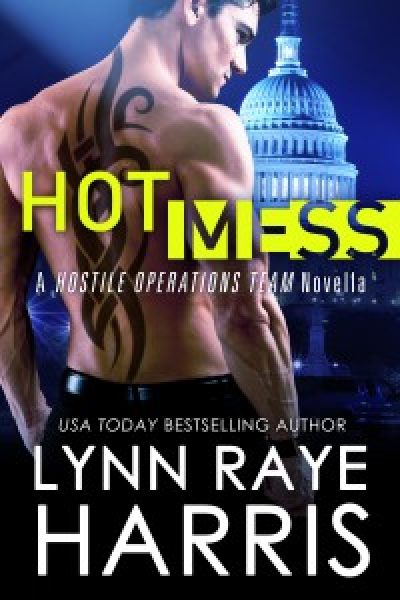 English professor Dr. Georgeanne Hayes has a problem. Her star pupil, an Army sergeant who works in a Top Secret government program, is missing—and someone tried to push her in front of a train last night.

Sam “Knight Rider” McKnight is used to looking out for Georgie. When they were kids, she was just his best friend’s baby sister. But Georgie’s not a baby anymore and Sam is getting some very male—and very dirty—thoughts about the girl he knows he can never have.

When someone threatens Georgie’s life again, Sam will do anything necessary to keep her safe. Even if it means spending the next few days locked up in a remote house on Maryland’s Eastern Shore with her.

Sam might be used to denying himself what he wants, but he’s about to find out that being cooped up with Georgie will push him to the limit. And maybe beyond.

USA Today bestselling author Lynn Raye Harris burst onto the scene when she won a writing contest held by Harlequin. A former finalist for the Romance Writers of America’s Golden Heart Award and the National Readers Choice Award, Lynn lives in Alabama with her handsome former military husband and two crazy cats. Lynn writes about hot military heroes, sizzling international billionaires, and the women who dare to tame them. Her books have been called “exceptional and emotional,” “intense,” and “sizzling.”

The car ride was silent. Or would have been if not for the incessant meowing of Georgie’s cat.
“You know something, Sam?” Georgie said, and he started at the sound of her voice breaking into his thoughts when the cat had almost become white noise to him.
He shot her a glance. “What?”
“Maybe I don’t want you to be good. Maybe I want you to be as bad as you can be.”
Sam gripped the wheel of his truck and stared straight ahead. Jesus. “Don’t say shit like that to me, Georgie. You know I’m not going there.”
She snorted. “Boy, do I.”
“Georgie—”
“No, don’t you Georgie me. When you stopped that night…” He could feel her looking at him, her eyes boring an angry hole into him. He told himself she was reacting to everything that had happened to her today and taking it out on him. This wasn’t really about something that had happened twelve years ago. It was just a convenient catalyst.
“When you stopped that night, I thought there was something wrong with me. I thought I wasn’t sexy enough or special enough for you. And that hurt.”
“Of course you were,” he bit out. “But you’re Rick’s little sister and I was the wrong guy for a lot of reasons. I stopped because you were special.”
“You were the one I wanted.”
He swallowed hard. “I couldn’t do it, Georgie. I couldn’t do it and look Rick in the eye ever again. Or your parents.”
She didn’t say anything for a long moment. “You know who was my first?”
“Goddamn it, I don’t want to know.” His voice snapped in the interior of the car. Even the cat went silent. Sam closed his eyes. He did not lose his temper. Not ever. But she made him forget all the vows he’d ever sworn to himself.
Georgie folded her arms over her chest. “Fine. But you know what you need to remember right now? Here it is, so put it front and center in that brain of yours and keep it there. I’m not your sister, and I’m not a kid anymore.”
Sam sat there in stony silence, uncertain what in the hell he could possibly say. No, she wasn’t his sister. But it was safer for him if he thought of her that way. He wanted to keep her in a safe place in his head, but in the space of a conversation she’d gone and thrown her grappling hook over the walls he’d erected and torn them right down.
She thought he had trouble remembering she wasn’t his little sister. No, what he had trouble remembering was that he was no good for her. Because damn if he didn’t want her. He wanted her every possible way he could have her.