You are here: Products Hot Communications by Carey Decevito 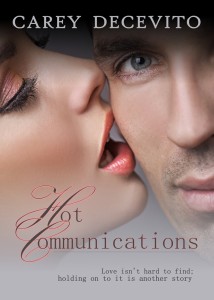 Love isn’t hard to find. Holding on to it is another story.

With everything being bountiful in her life, Lacey Flannigan had everything she could ever want. An illustrious career with James & Sons, beauty, a multitude of friends and a financial wealth beyond what she could ever hope for, thanks to her parents.

Still, one thing eluded her – love. When things get hot and heavy between her and a co-worker, no one thought that their very existence would be threatened.

Hot Communications is a sexily thrilling tale that will delight your every senses!

Carey Decevito has two published works entitled Hot Communications and Once Written, Twice Shy which is part of a five-book series named The Broken Men Chronicles. She enjoys spending time with family and friends, the outdoors, traveling, and playing tourist in Canada’s National Capital region. When life gets crazy, she seeks respite through her writing and reading. If all else fails, she knows there’s never a dull moment with her prolific story-teller of a four-year-old daughter, her goofy husband and their two cats who she swears are out to get her.

In a simple explanation…a dream, a wild imagination chased with a case of insomnia. I discovered that people gravitate to office romances so I put my very own spin to the premise, combined a bit of thriller, some suspense and voilà!

Lacey lay on the floor surrounded with nothing but their clothes. Her body throbbed with the aftermath of his explosive pleasuring. She was beside herself that a man such as him would be drawn to her of all people. Sure, they’ve shared glances but not once had she ever imagined that something between them would ensue.
His hands were heaven and she wished that he would keep them on her at all times and never let go. His lips were torture as he had licked and kissed down her body and pleasured her most intimate areas while she lay there quivering beneath him and begging for more. He ravaged her until she broke.
In truth, this man was the whole package. So why had he chosen her to inflict the most wonderful of all fiery tortures known to mankind?
She didn’t know nor did she care.
“Earth to Lacey?” Wendy’s voice made its way through the lustful clouds of Lacey’s daydream.
She turned to face her assistant who stood there with a goofy grin, holding the files she’d asked her to fetch prior to leaving for the day.
“If that’s all, I’m out of here, boss,” she said.
“Enjoy your night.”