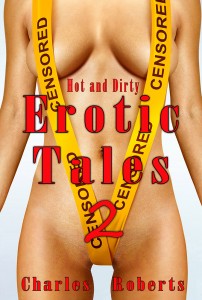 Lose yourself in a world of fantasy and desire … where Harriet Colsden the vicar’s daughter has fun and games with a burglar she caught red-handed … where missionary Sylvia Barton-Rogers, lost in the jungle, stumbles into a village of sexually liberated pygmies who test her conservative morals to the limit … where Chinese student Ya Wen Hsu goes a little too far in her attempts to assimilate into American college culture while at a house party … where Charles Golwich gets a devilish idea when he sees his wife having a video chat with her elderly mother … where Captain Roseanne Fields of the USS Benwith gets a surprise when she takes shore leave with her commanding officer.

Charles Roberts is a chronically shy 48-year-old man who wishes that the things he writes about would happen to him.

Sex sells, I need money, and I’m a half-decent writer.

The lad opened his eyes and saw her slim body perched on top of him, her hips gyrating.
“Don’t look,” she said.
“Why d’you want me to keep me eyes closed?” he asked.
“I don’t want to be looked at,” she said.
“Why not?” he asked.
“Because I’m not pretty,” she said. “So close your eyes, slave.”
But instead of closing his eyes, he sat up and reached out towards her and removed her glasses and threw them to one side. Then he reached round the back of her head and pulled the elastic scrunchy from her hair, letting it fall free.
“You look all right to me,” he said. He then looked down at her large breasts. “Better than all right, actually,” he added, placing a hand on a breast and fondling it. Then he took a nipple in his mouth and flicked it with his tongue. She let out a moan and continued moving her hips, grinding her pussy against his cock.
After some time, as their pleasure increased, he leaned forward and kissed her passionately on the mouth.
“It’s my first time,” she confessed with a gasp.
“No way,” he said, genuinely shocked. He gave a toothy grin, then said, “It doesn’t feel like it. I mean, you know. It went in easy, like.”
She paused her gyrations. “First time for a cock,” she said. “I’ve had other things in there.”
“Like what?” he grinned.
She considered for a moment. “Carrots … cucumbers … bananas … bottles. A clarinet once.”
They grinned at each other, then he raised himself up, overbalancing her and pushing her backwards. She lay on her back on the grass and spread her legs wide. He pushed his cock, which had slipped out, back into her flooded pussy, causing her to moan in ecstasy. The knowledge that it was her first time increased his excitement, and he kissed her again on the mouth, then found her left ear and plunged his tongue inside. Her hands clenched around his back and pulled him closer.
After a couple of minutes, she felt the pleasure from her tingling clitoris rise to an unbearable intensity, and suddenly it overtook her in an explosion of sexual release, her pussy quivering and oozing with climactic juices.