You are here: Products Hooky: One Act of Defiance Can Set Her Free by Alicia Stills 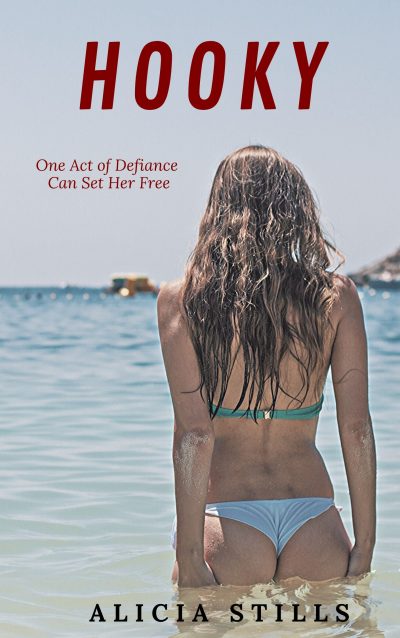 Hooky: One Act of Defiance Can Set Her Free by Alicia Stills

Trapped in her own head and constantly drowning in insecurity, Abbie has spent nearly her entire adult life too afraid to do anything outside the bounds of what she thinks everyone expects from a “good girl” like her. But after years of following all the rules and demanding perfection from herself in nearly every aspect of her life, Abbie finally decides to misbehave. The simple act of calling in sick to play hooky may be all she needs to break away from her anxiety and take control of her own desires again. Emboldened by a mystery woman on the beach and fueled by the memories of failed relationships, she finds herself embracing the exhibitionist within and giving in to an enticing stranger.

Alicia Stills is a busy wife and mother who has always wanted to get into writing stories. Most of her writings are focused in the romance and erotica genres, and she has a particular affinity for men and women who find themselves attracted to sexual situations involving one woman and two (or more) men. Being able to put the dirty thoughts that exist inside her head into written form to share with the world has been both exciting and challenging.

Most of the stories she writes are purely of her own imagination, although many are inspired to some degree by her own experiences. She feels lucky to have had her husband by her side for so long and willing to share in the good, the bad, and the weird. After growing up in an environment where sex was seen as immoral and too taboo to even think about, being given the support to express herself via writing has felt very freeing.

It took Alicia several years after finishing grad school to start writing on a part-time basis. Even then, she only began putting pen-to-paper after receiving encouragement from her husband. Perhaps he really believed in her. Perhaps he was turned on by the sight of her furiously pecking away on her keyboard. Or perhaps he just wanted her to have some other outlet after finding himself unable to keep up with her pitching her various stories as roleplay activities. The world may never know.

For more about Alicia, please check out her blog: https://aliciastillsauthor.design.blog/

When I first began writing this story, I had visions of it being much different than what the final product became. The idea started from a brief encounter I had that occurred at least a decade earlier. I was walking around one of the lakes with my boyfriend (now husband) near where I used to live. Walking past me from the opposite direction was a woman that I would guess was a few years younger than me, but probably about 19 or 20 years old.

We made eye contact almost as soon as she came around a corner and was no longer blocked from my sight by bushes that lined the walking trail. Immediately, I noticed that she was wearing a very small bikini. Her boobs were spilling out of her top and her bottoms were small enough to be at least borderline scandalous for a family-friendly beach for that area and in that time period.

But the size of her bikini wasn’t what was eye-catching. What was eye catching was that she had a guy on either side of her and one more following behind. All three guys were grabbing her ass as she laughed and half-heartedly swatted at their hands. Her bottoms had been pulled down and twisted a little bit and as we made eye contact, she hastily started adjusting her bikini. They all tried to pretend that they hadn’t been doing anything, but a guilty little smile from her let me know that she knew they had been caught. My boyfriend and I apparently looked entirely non-threatening to them and by the time we crossed paths, she had slid her fingers inside of the waistband of the two guys walking beside her.

My boyfriend and I had already started exploring having me be with other guys by that point, but I was really enamored with the way she shamelessly was fooling around with three guys in public, even if it was all pretty PG at that point. I turned to watch the foursome carry on down the path and saw the three guys continue playing grab-ass with her.

So, with that memory in hand, I sat down and thought I would focus on that isolated incident. However, when I started the writing process, I kept thinking about how the main character was going to get to where she was in that moment. What happened to her in life that made her so fascinated with seeing this woman with those three guys? I began to generate a backstory for her, and yes, drew some parallels from some of the themes that have run through my life.

One of the most consistent themes I’ve experienced in my life and heard of from other women is that women are constantly being judged by others, particularly for how we choose to live our sexual lives. This fear of judgment and being thought of as a “whore” or “slut” by people who have nothing to do with us restrains many of us to the point where we are allowing that judgment to dictate our choices. I tried to contrast this feeling of shame and judgment with this mystery character who seemed intent on being impervious to it all.

I hope you enjoyed this opening chapter. I expect that Abbie will have more story to tell.

A preview of the book is available here: https://aliciastillsauthor.design.blog/2020/04/15/hooky-preview/

Be the first to review “Hooky: One Act of Defiance Can Set Her Free by Alicia Stills” Cancel reply