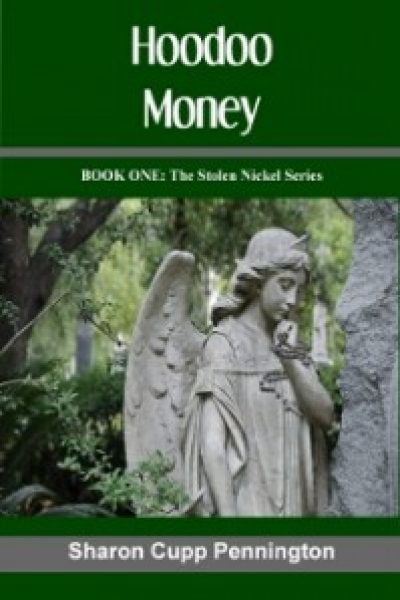 Things are not always as they seem in the Big Easy…

After her almost-wedding to a bigamist, successful children’s author Braeden McKay has given up on love. She’s content to live vicariously through her imaginary heroine, Platypus Pearl, and a gaggle of adventurous, web-footed cohorts — until a working vacation in New Orleans shakes up her quiet, structured world. Had she known that souvenir nickel stolen from the grave of a hoodoo woman would catapult her into a nightmare of betrayal and murder, she would have insisted her friend put it back.

Cursed nickel or unfortunate happenstance? Sanderson Montgomery isn’t one to discount the supernatural beliefs of others. This is the Big Easy, after all, Mecca to the spiritual and the superstitious. As a veteran detective, neither does he ignore cold, hard fact. And the fact is, someone or something is bent on harming Braeden McKay, and it’s up to him to protect her while keeping his heart out of the mix.

Can love, the very thing Braeden wants no part of, be the one force greater than any adversary — even a hoodoo curse?

Sharon Cupp Pennington’s short stories have appeared in numerous online and print venues, with anthology contributions to The Rocking Chair Reader in the Coming Home edition (2004) and Family Gatherings (2005), A Cup of Comfort for Weddings: Something Old, Something New (2007), and Good Old Days Magazine (March, 2007). Her debut novel, Hoodoo Money, and the second installment in The Stolen Nickel Series, Mangroves and Monsters, were released in second editions on September 21, 2013. She resides in Texas with her husband, Wayne, where she is currently working on her next novel.

The events in Hoodoo Money are loosely based on an incident during the trip my eldest daughter took to New Orleans in her early twenties. Shelley did actually lift a nickel from the grave of a voodoo queen, then she was mugged going back to her car, and thus…HOODOO MONEY. Plus a hefty does of my imagination, of course.

Hidden by A uniform row of tombs, a solitary man watched and waited, a canvas shopping bag on the ground near his feet. Unaccustomed to the contact lenses, he blinked several times, then squinted as he raised his camera.
He smiled. Today his eyes were umber, the color of shadow, how appropriate. Beneath the Orioles baseball cap, his thick sandalwood hair, a new shade and slightly grayed at the temples, added bogus years to his clever disguise.
Through the camera’s viewfinder, he studied the somber tableau stretched out before him. A mortician’s Valhalla, the rows of tombs seemed endless. Path upon narrow path, they formed a macabre latticework of dead-end streets and snaking avenues, permanent addresses to poets and pirates, paupers and pompous politicians.
He panned his camera left. Many of the burial chambers were large and ostentatious, with friezes sculpted into their deep sides and elaborate statuary embellishing their rooftops. The relentless sun bleached their white marble doors and half-dead grass breached the stone paths leading up to them.
They reminded him of poorly kept yards and poorly kept lives — of long kept secrets at risk of being unraveled.
He tracked the camera forward, where the crypts appeared as shrunken, windowless replicas of local banks and civic buildings, the Garden District’s grand mansions. Others resembled the gallant Bastille, surrounded by garish cast iron grillwork, rust staining their concrete foundations. Still others, low rent efficiencies and walk-ups of handmade brick, crumbling with age, corners jutted out as if to snag the attention of the next passerby.
Panning the camera right, he zoomed in until Simone Dubois’ grave and the two women filled the viewfinder. Killing the arrogant journalist, Dalrymple, had been easy, even pleasurable. But he had never killed a woman.
The prospect of doing so left him both excited and nauseous.