You are here: Products Hollywood Demands: The Completed Series by Jasmine Lace 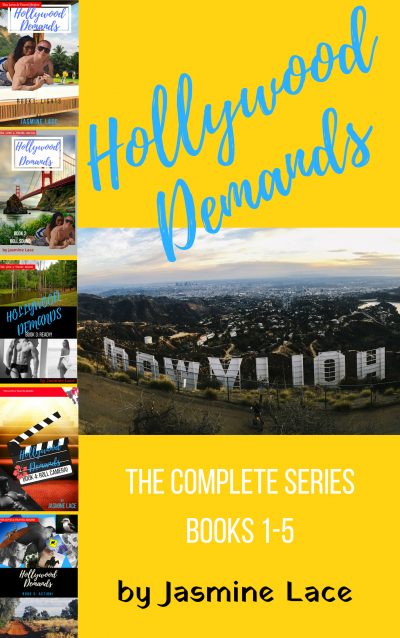 It’s a BWWM Romance Erotica about the ups and downs of an African American publicist and an Australian actor. The couple fact comical and dramatic obstacles as they fall deeper in love with each other.

HOLLYWOOD DEMANDS: The Completed Series (Books 1-5) Hollywood Demands,
Book: 1: LIGHTS! FAME, SEX, and SUCCESS have its price. He’s the bad boy of Hollywood. She’s been assigned with the difficult task of taming his beast within. When love gets in the way, they are reminded that it doesn’t come for free.

Book: 2: ROLL SOUND! “WINE AND DINE THE CLIENT. DO WHATEVER IT TAKES.” Words from Kyle Ross, Mya Bassett’s ex-lover and boss. But Mya is not sure she is prepared to do whatever it takes to win back her position as Chris Foley’s publicist. Especially if it takes giving up a piece of her heart and body.

Book: 3: READY! EVEN STEAMIER! Hurt and betrayed, Chris wants nothing to do with Mya. Soon, he realizes that he will need her to set things right back in LA. Yet, his pride won’t go down without a fight. Can Chris push pass his heartbreak to recover his livelihood?

Book: 4: ROLL CAMERA! HEARTBREAK. SECOND CHANCES. AND FLIPPING THE SCRIPT ON SEX. Mya Bassett’s heartbreak has turned into anger while Chris Foley mourns his decision of letting Mya go. Through chance encounters they realized definite truths: Chris can’t stay away from her and Mya has to get as far away from him as possible. Will another man be what Mya needs to break from the emotional and sexual spell Chris has on her? Or can Chris convince her that his love for her is real?

Book: 5: ACTION! It was only supposed to be sex. GOOD SEX. Waking up in a strange bed is the least of Mya Basset’s problems. Join Mya stranded in Chris’s Australian backyard as she finds out more about the man behind the fame. Will the real Chris make her fall in love again?

Hollywood Demands was originally published as five separate contemporary romance novellas about an interracial couple who find out that they have a love stronger than any whirlwinds of drama and other distractions. Follow Mya and Chris during their travel romance as their love story unfolds in the romantic destinations of California, Alabama, Hawaii and Australia. This complete collection features all five books plus reading group discussion questions and an excerpt from Jasmine Lace’s contemporary romance, Pura Vida. Read more sexy, exciting tales from Jasmine Lace at her blog, jasminelace.org.

She works as an ESL teacher in the evenings, a 24-hour mother and a late-night indie writer. Some days sleep is her most treasured pasttime.

Plus, I met my husband travelling. I've travelled around a lot and I wanted to incorporate the things I saw in my writing, in hopes that it might inspire others to travel and fall in love (with the destination and/or someone special).

“Well, mate. And you?"
"Good. Have you met, Mya Bassett?"
"Yes. In fact, she was offerin’ me a shot," he smiled down at her taken aback expression. Before she could deny his fictitious claim, Chris asked Mike, “Would yoou like to join us?"
"No, I can't. I have to run." Then, he turned to Mya. He placed a gentle hand on her arm. "Sorry, I have to go. It was really nice meeting you."
"You too. And thank you for introducing me around. That was really kind.”
“No problem. I'll give you a call sometime," he kissed her cheek.
"Yeah, it will give me a chance to insult you again," she laughed.
"Looking forward to it," Mike flashed her his dimples and was off.
Mya was left alone with heart-throb Chris again. She looked over at his confident smirk. Mya swallowed a giddy smile as Chris slid closer over to her and asked in a deep voice, “So, how about that shot?"
“You're dangerous company, aren't you?” Mya flirted back.
“Me? I'm harmless,” Chris came over closer. “There's nothin wrong with offerin a beaut like yoou a drink.”
“A shot,” she corrected him.
“Well, a mini drink. Anyway, who needs all that soda in a cocktail.”
“Yes, it's just extra calories, isn't it?” Mya playfully said. It was a jab at LA's health crazed diets that most stars and residents pledged their lives to.
“Roigh,” he smiled again. His smile was bright and wonderful as if you were the only one a part of his inner joke on the world. Mya felt special to be in his close circle. “Gorgeous and health conscious. I like that in a woman.”
Mya stilled her wobbly knees at the mention of him calling her gorgeous. It rolled off his tongue in a slightly nasally sing-song voice. Chris's Australian accent curled around her ear which perked up in pleasure.
In the back of her mind, she couldn't help think this was another one of his smooth moves to get a groupie into bed. Mya's instincts told her to distance herself from him before she ended up on Access Hollywood walking after him from some hallway closet with disheveled hair and makeup.
That would be great, she thought. Classed as another one of Chris Foley’s sluts.
“Well, what I hear, you bump into a lot of women that fit that description." she slyly hinted to his playboy reputation.
“Oh, I wouldn' worry about hearsay,” he spoke softly. His eyes bright with merriment and sexual drive. Then, he lowered his voice. "Tonight, you're the only one I'm interested in."
Mya's heart raced. Her face and the back of her neck got hot. She tried to hold her ground. Mya couldn’t allow herself to fall for his charm and devilish good looks.
She turned a playful smile towards him and said, "From most men, I would find that sweet, but most don't have every flavor of the week following."
“Ooooh, yoou would prefer one like Mike Chang," he blew out a ridiculous huff.
“What’s wrong with him? He's sweet and you don't hear about his orgies," she cut into him in a protective need to defend her new friend.
“I don' know," his 6’ 2” body leaned down to her face that was a good 6 inches down from his.
Chris’s breath brushed her ear as he whispered, "Yet, if I was him, there would be nothin’ so important that I would leave here without yoou."
The way he had caress the word "yoou" made Maya's panties soak. Her heart bounced off her chest plate. Blood rushed around her body, sending her head spinning. She was two seconds from leading him to her town car when red manicure nails rushed around his chest and grabbed his pumped pecks.
Chris turned to wrap his arms around Top Model, Amanda Slater. Her long legs went up to her neck, barely covered by the light pink day dress she wore. A complete contrast to Mya's short legs and thick thighs. Amanda’s rosy skin was radiated by the color of her pink dress. Her blond hair was pulled into a tight bun on top of her head.
"Chris, darling, how are you?" she asked during a long hug.
"Great, now that I got such a gorgeous beaut at this party."
I thought I was gorgeous, Mya thought with pursed lips.
"Yes, the fun has arrived," Amanda said. She was referring to herself. She began chatting on about a party in the Hills that night.
Mya had obviously been forgotten. Chris absent-mindedly moved back nearly stepping on Mya's heel.
You're just going to step all over me, huh?!?! She thought. Like I'm not here.
Mya was surprised and her pride hurt from being discarded and forgotten so quickly. Even if it was over a Top Model. Annoyed by being ignored, she turned to leave. Unfortunately, a ripping sound from her dress stopped Mya’s flight.

Be the first to review “Hollywood Demands: The Completed Series by Jasmine Lace” Cancel reply