You are here: Products Holiday Release by Nicole Swan 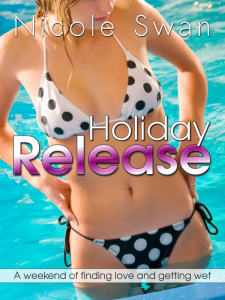 Surprising her boyfriend for his birthday did not work out quite how Jasmine had planned. Broken hearted and feeling lost, her best friend convinces her to spend the weekend at a gorgeous hotel for some serious pampering. . . only her best friend is a guy who wants to do more than braid her hair and paint her nails.

Wanting to live the dream of what *should* have happened on several weekend hotel retreats.

Jasmine half sat up, shielding herself under the blankets. She was too embarrassed to have any other emotion than shock. She turned the toy off, concealed under the sheets.
Jake had a huge smile on his face. “Were you just having fun by yourself?” he asked.
“Oh, my God! Get out! You’re such a bastard.”
Instead of leaving, he walked over and sat on the end of the bed. She moved her legs out of the way so he didn’t crush them.
“The offer still stands,” he said. “Let me take you away next weekend. It doesn’t have to mean anything. I can be your human vibrator.”
“Have you ever considered, I don’t want to be filled with your poison?”
“It’s not poison, it’s medicine.”
She sighed. “I can’t.”
“Why not?”
“I don’t move on as quickly as you do, Jake. Now can you get out?”
“When you’re ready for some real affection, give me a call.” He stood up, and tossed the blankets into the air getting a good view of her before he left. “Nice legs!”
She threw the vibrator at his head. It hit the wall.
“Missed!” he called back as he scooted from the room.
She flopped facedown into the mattress. “Bloody hell,” she said. The moment had gone.