You are here: Products HOLIDAY by Nick van der Leek 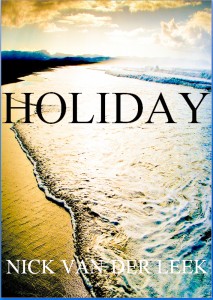 Hugh van Lewen, an ESL teacher working in South Korea, travels to the Philippines for some R&R. But immediately after landing at the Puerto Princesa airport on the island of North Palawan something seems to be wrong. All flights have been cancelled. Everyone is crowded around a flickering TV. A super typhoon has emerged out of nowhere and – to everyone’s horror – is barreling right towards the island. As the waters rise and the walls move in Hugh (and Stella, a teenage girl) batten down the hatches. But surviving a single storm on the island is not the end of the game. It’s the beginning.

As the world seems to be unraveling around them, Hugh must make a choice. Should he take Stella under his wing, which could slow him down in getting to a place of safety or should he go it alone? And where is safe with all communications down, and everywhere seemingly in crisis? Is there any point to getting off the island, and going anywhere, because the problems on the world’s mainlands have just begun…

Inspired by Cormac McCarthy’s The Road