You are here: Products His Woodland Maiden (Space Lords) by Michelle M. Pillow 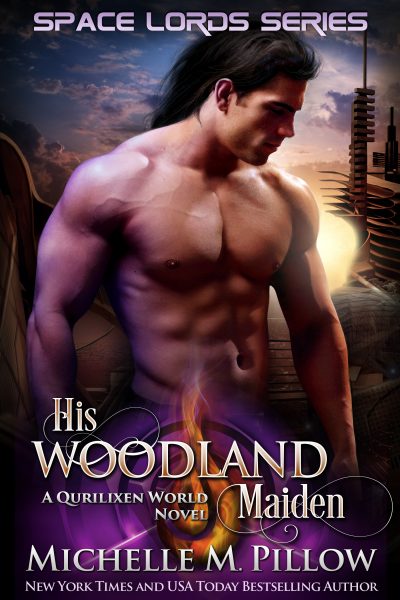 Pilot Rick Hayes flies the high skies searching for mischief. It looks like she finally found him.

Space pirate and all-around bad boy, Rick Hayes isn’t looking to change his ways. He’s one helluva pilot, has a crew he thinks of as family, and women seem to want his company. What more could a guy want? Life is too short to settle down, and he knows firsthand the less you care about, the less it hurts when you lose it. Too bad his logic doesn’t always get through to his heart. When fate tempts him with a beautiful woman that appears to see through all of his defenses….

Well, actually, the frustrating star beam took him prisoner, hit him over the head, and stole his memories, but regardless of those few minor hiccups on the road to romance Rick has to decide if love is worth the risk.

Michelle M. Pillow is a NY Times & USA TODAY bestselling author of romance and cozy mystery, and winner of the 2006 Romantic Times Reviewers' Choice Award. Her novels have captivated and enthralled audiences for over a decade. Fan favorites include the Qurilixen multi-series collection and Warlocks MacGregor. She loves to interact with readers. MichellePillow.com

The character of Rick Hayes has long been a fan favorite in the Qurilixen World. The time has come for him finally to meet his match in love. Of course, since he's so cocky I can't make it easy on him. He'll get what he deserves and more.

Be the first to review “His Woodland Maiden (Space Lords) by Michelle M. Pillow” Cancel reply