You are here: Products His Unexpected Companion: Women of Destiny by Patti Sherry-Crews 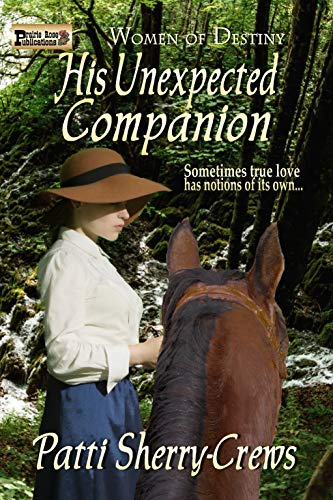 His Unexpected Companion: Women of Destiny by Patti Sherry-Crews

Olivia Darling is her own woman—self-sufficient, intelligent, and wise to the ways of the world. She’s also beautiful enough to rile other women and garner unwanted attention from men, which could bring more danger down on her than living the outlaw life she’s taken to. Headed home to Colorado, she’s ready to put her past behind her—but what kind of reception will she get?

Kit Traver is headed home to Colorado, giving up his law practice back East to return to the place he loves—and the woman he intends to marry. His life neatly planned, this journey will give him the time he needs to be alone with nature before he takes on the responsibilities of practicing law again and being a married man.

When Kit and Olivia meet in Denver, it’s not the best first impression—for either of them. But, they are traveling the same trail, so it’s only natural they ride along together. It’s obvious to Kit that Olivia needs his protection—if only from herself!

But traveling together ignites a fire between them that can’t be ignored, especially once they arrive, only to discover that everything has changed while they’ve been away. With her father mysteriously murdered, Olivia has her hands full trying to keep the big ranchers from pushing her off her family’s small spread. Can Olivia and Kit make a home together? Will Kit walk away from his socialite family for the love of HIS UNEXPECTED COMPANION?

Patti Sherry-Crews is an award-winning author who lives in Evanston, Illinois. She never gave up playing cowboys and Indians, or dreaming of knights in shining armor and writes historical western and medieval romance. Sometimes she stays in her own century and writes contemporary stories, but whatever she writes you can be sure there will be romance and armchair travel included.

I love researching the Outlaw Trail of the old west. I can't get enough of Butch Cassidy's Wild Bunch and the women who loved them. This book was inspired by one such woman, Ann Bassett of Brown's Park. She was an intriguing mixture of a boarding school educated woman and a tough as nails daughter of a rancher who could match any man for shooting, riding, and cattle rustling. She was a lover of Butch Cassidy and other outlaws and lived old her old age on her own homestead in a remote area of Colorado.

Be the first to review “His Unexpected Companion: Women of Destiny by Patti Sherry-Crews” Cancel reply