You are here: Products His Reaper’s Passion by Michelle MacBride 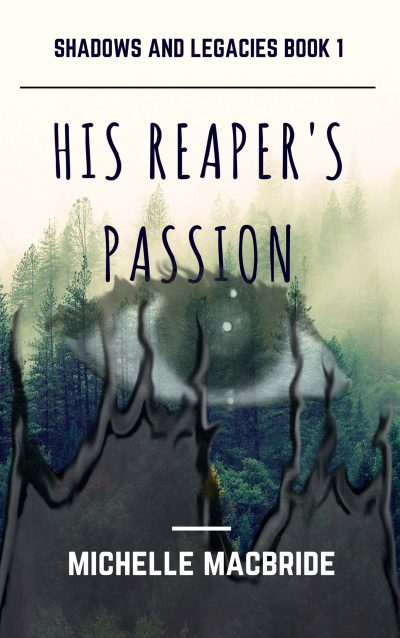 His Reaper’s Passion by Michelle MacBride

It is early August of 2017. Merc Pritchett and her family have just made their big move to Prince Rupert, a small port city in Canada. It was a fresh start. It was a chance to establish themselves as an ordinary, functional, and most importantly, HUMAN, suburban family.

Merc is a determined twenty-one-year-old, with an admittedly odd name, who is not going to let her true nature dictate how she should live her life. Being the daughter of Death – and the first human/reaper hybrid – is not an easy existence. It is a legacy she didn’t ask for.

Paul Ward is her next-door neighbor. His very presence in her life starts to complicate things. Merc wants to keep her distance, but somehow fate seems to want to bring these two closer together. A disaster occurs, and this man learns the terrifying secret that the Pritchetts keep. There is no turning back and Merc is forced to let him in.

She doesn’t even want to contemplate who is the threat behind the scenes that is threatening the balance she is working so hard to keep.

Michelle MacBride is a young Canadian woman who is currently attending university. She is a pleasant, easy going person who loves consuming fiction and binge watching her favorite shows. She has a penchant for the paranormal and macabre in particular, enjoying shows like American Horror Story and Supernatural. She has read countless books in the genre and dreams of starting a serious writing career of her own. Michelle is channeling that interest in the novella series she is writing.

A continuous crackle and grind disturbed the tranquil atmosphere as the gravel driveway became host to a slowly reversing red minivan. The beeping of the vehicle, accompanied by its flashing curtain of red light, instantly became the center of attention in the sparsely lit residential neighborhood.

Several houses lined both sides of the two-lane asphalt street. Those visible in the night light were either one or two stories high, with a garage and a neatly cut lawn. The front yards that stood out were littered with ornaments or topiaries trimmed in an odd fashion. One property on the far end of the street had a boat parked on the driveway.

A front window curtain shifted to reveal a face peering at the minivan reversing onto the driveway of the soon to be occupied suburban house next door.

The flashing lights and noise stopped as the minivan screeched to a halt a few feet away from the closed garage door. The back door facing the decrepit hibiscus shrub on the edge of the property flung open.

A tall, gangly figure, obscured by the poor lighting, emerged from the vehicle and then sprinted towards the front porch.

Several more doors opened after the engine noise abruptly died down. A childlike figure appeared and skipped the distance between the vehicle and house. Shortly after, two average height individuals, who vaguely resembled a man and woman, met each other on the lawn and stood there, seemingly chatting with each other.

The observer in the window shifted the curtain further aside to get a clearer view of the strangers outside. Unbeknownst to said observer, someone else was actively spying on the neighboring households.

A black cotton blanket slipped to the ground as the last passenger stepped out of the vehicle. Kinky locks of hair nearly touched the gravel as the young female bent down to pick it up.

Arms reached out towards the dark sky as the short woman groaned, as if she was ridding herself of muscle pains gained from her time as a passenger in the family vehicle. To the man in the window it looked like harmless stretching. Merc closed her eyes while she spread her arms and inhaled the fresh night air.

"Come to me," she whispered with a fragile breath.

Distantly moaning shadows, which were undetectable by human senses, sprung to life from multiple corners of the street. They raced along the surface of the earth towards the standing female. Within seconds, the ground beneath Merc's feet resembled a spiraling black hole, until it dispersed immediately in compliance with a sharp dismissive gesture.

Paul Ward glared in confusion at the strange movements of the girl on the driveway, in the middle of the night.

Before he could contemplate why several members of this new family were just basking in the moonlight, he felt a sudden bout of nausea. Paul's head began to spin, nearly causing him to rip the curtain in an attempt to steady himself. It didn't last more than ten seconds.

"Maybe I really do need those iron supplements," Paul grumbled as he quickly brushed off the experience.

After regaining his composure, the young man decided to turn in for the night and leave the new neighbors be. His hand gripped the satin material gently, as it was his mother's handmade accomplishment.

Before fully covering the glass window pane, he shot one last glance at the property next door.

He could have sworn that strange girl was looking right in his direction and making direct eye contact with him, though that was impossible with the darkness surrounding her.

He kept his gaze on her. His head hurt.