You are here: Products His Personal Assistant by Lexie Davis 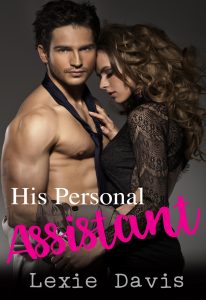 His Personal Assistant by Lexie Davis

There is nothing I wouldn’t do to please my boss.

A harsh break-up leaves him single.

I think he needs a friend.

Instead, he tells me he needs a f*ck.

He makes it extremely difficult to say no.

A one night stand never hurt anyone, right?

He promises me all the pleasure I can stand.

Lexie’s love for writing began when she wrote her first play in fourth grade. With a big imagination and love for creating worlds, she wrote several more scripts that have placed first in contests. She loves to read and fell in love with the romance genre in high school. Now she writes steamy stories, with heartfelt characters, letting her imagination take her wherever it may go.

“What do you want, Grace?” he asked.
“To tell you that you deserve better. And to make sure you don’t do anything stupid.”
Chase narrowed his eyes at her and she shrugged. He didn’t need the alcohol to get rid of whatever it was that he felt. Grace took in how well he filled out his tailored suit. The stupid thing probably cost her salary for a month. But damn, he looked good wearing it.
“Look, I want to cheer you up. You’re a great guy. Any woman would be lucky to have you. Don’t let one snob bring you down. You’re better off without her.”
He tipped the shot back, downing the amber liquid. “Another, Mac.”
He slammed the glass on the bar, sliding it to the bartender. Grace watched him as he avoided her gaze. He had no plans to talk to her, it seemed. While Chase was quite desirable, he was male. Sometimes that genetic factor made him incredibly obtuse.
Grace thought about his breakup. Two minutes after Libby dumped him—in front of the entire office, no less—everyone in the building knew about it. The bitch even went into detail about how she had to use her vibrator to keep her satisfied, because he wasn’t home enough to fuck her properly.
Grace saw red with that. Libby only did things to suit her purpose. That little jab was to stroke her own ego. Chase worked his ass off for that woman, and for what reason? She got whatever the hell she wanted, when she wanted it. He bent over backwards to answer her every beck and call. And instead of appreciating him, she whipped him like a battered dog.
“You can drink all you want, it won’t make anything go away.”
He finally glanced over at her. “Who says I want something to go away? Maybe I’m celebrating.”
She couldn’t help it. She liked her boss. While sarcasm dripped from his tone, she knew deep down he did hurt. He did want to make her go away. Relationships were tough and breakups were even tougher.
“Look, Chase. I’m just sitting here because you need a friend.” She reached out to cover his hand with her own. “You deserve better than her. Don’t wallow. Go find it.”
He scoffed, grabbing the shot glass from the bar and gulped it back with one toss.
“I don’t need a friend. I need a fuck.” His eyes met hers, no longer glossy with tears, but simmering with drunken desire. “You gonna offer me that?”