You are here: Products His Heart’s Desire by Julianna Douglas 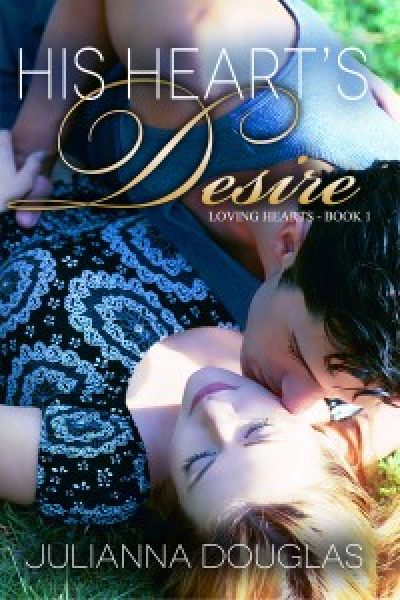 His Heart’s Desire by Julianna Douglas

Rebecca Anderson always dreamed of happily-ever-afters, but those dreams were shaken when she had to leave vet school to nurse her dying mother. They were completely shattered when her boyfriend betrayed her in the cruelest possible way. Crushed and lonely, Becca seeks out the one person she knows she can trust–her best friend, Ethan.

Successful CEO Ethan Montgomery has loved Becca since the day he met her while volunteering at a local animal shelter. Seeing her emotionally broken on his doorstep stirs his protective instincts. He tenderly cares for her, but knows that Becca will need time and space to heal her battered heart.

When Becca realizes that the white knight of her fantasies has been right in front of her this whole time, she begins to dream again of her future–one that includes Ethan. But their undeclared love is put to the test when Ethan’s wealth and power, as well as a woman from his past, threaten to tear them apart. Will a surprise invitation from Ethan finally fulfill all of Becca’s romantic fantasies and prove that only she is… His Heart’s Desire?

I currently live in hot, sunny Phoenix, Arizona with my wonderful husband who is also my writing cheerleader and technical guru, our two teenage children (one boy, one girl), Tundra, our Husky/Great Pyrenees mix dog, and our three cats, Lucy, Misty and Mackenzie. When I’m not reading or writing, I can usually be found hanging out on GoodReads, surfing the web, watching TV or movies, book shopping, or feeding my insatiable thirst for knowledge. I also run the book review website, The Hope Chest Reviews.

Strangely enough, I never envisioned myself as a writer until about 5 1/2 years ago. I’d been active on GoodReads for about a year, and a friend of mine on the site invited several people, myself included, to join an online writing group she was starting. To kick things off, she gave us three writing prompts. I completed the first two fairly easily, but the third involved writing a romantic story. It could be short, but it had to be a complete story. Well, needless to say, that one stopped me dead in my tracks. I didn’t think I could do it. Then out of nowhere, the characters of Ethan and Becca came to me and started telling me their story. Soon I found myself not just writing a short story, but a complete novel, and the rest, as they say, is history.

Chapter 1
It was the worst day of Rebecca Anderson’s life.
She sat in the dry shelter of her little Honda Civic, weeping uncontrollably. She doubled over to rest her head on the steering wheel as the painful memories of what had happened that day sliced through her like a knife. Her arms were crossed tightly over her chest, as though protecting that most vulnerable part of herself, while violent sobs wracked her body. Having descended into the depths of despair over an hour ago, she couldn’t seem to turn off the anguished voices in her head.
What was she going to do without her mom? Why did she leave Ethan this afternoon? How could she ever have thought that a guy like Jay would make a good boyfriend? She shouldn’t have trusted him for a minute, much less months. She’d been a fool!
Now she was faced with the harsh truth. Her mother was gone. Her virginity was gone. And her boyfriend had been nothing but an illusion.
All she had left was her friendship with Ethan, though her stupid choice would probably make her look foolish even to him. She wanted nothing more than to seek the comfort of his arms. But wasn’t it the desire for human contact that had gotten her into this mess in the first place? The logical part of her brain reasoned that Ethan could never be as cruel as Jay had been tonight. The mere thought of Jay’s betrayal sent her into another round of gut-wrenching sobs, making it impossible for her to contemplate it further.
Finally, the sorrow subsided enough for her to lift her head. She stared sightlessly into the bleak night. Around midnight, the gray clouds that had blanketed Phoenix all day finally released their burden in a rare torrential downpour. Between the rain cascading over Becca’s windshield and the tears obscuring her vision, Ethan’s house was nothing more than an indistinct blur despite being only a few yards away. A war of indecision raged in her mind over whether to go to Ethan or go home. As she reached for the ignition, a memory of the last conversation they’d had before parting ways late this afternoon came roaring back to her with vivid clarity.
Ethan started toward the front door of her apartment, grabbing his suit jacket from the back of the sofa on the way. He reached for the doorknob, but instead of opening it, he turned and covered the distance between them in a two long strides. He grabbed her hands, squeezing them tightly, his green eyes holding hers with a startling intensity. “Promise me something, Becca.”
She stared back, puzzled by his bizarre behavior. “What, Ethan?”
He loosened his grip on her hands, but still held her gaze with compelling force. “Promise me that you’ll either come to me or call me anytime, day or night, if you need anything. Anything at all.”
She nodded, feeling moisture in her eyes. “I promise,” she replied softly.
Ethan leaned over and gave her a quick kiss on her forehead. He then released her hands, opened the door, and stepped out into early evening air thick with the scent of rain.
Becca couldn’t believe she’d forgotten his words. It was almost like he’d had a bad premonition. If only she’d had the same gut feeling, she wouldn’t be in this predicament now.
As she continued to contemplate her situation, the irrational, negative voices in her head warned that she might lose Ethan’s friendship for being such an idiot, but she pushed them away. Instead, she replayed their conversation again and again until she finally convinced herself that he was indeed the one person she could trust. Eventually, the need to share her pain won out over her feelings of embarrassment and despondency, compelling Becca to leave the dry confines of her car.
Since she had no umbrella and no jacket, the huge drops of rain pelted her skin, sending an instant chill through her body. Even with the deluge pouring over her, instantly soaking her clothes and hair, she couldn’t seem to make her feet move quickly. They felt like massive weights, which had to be dragged along one plodding step at a time.
After what seemed like an eternity, she finally reached Ethan’s front porch. Her legs, weak from exhaustion, were no longer able to bear the heaviness of her heart. She leaned against the front door and then promptly slumped to the porch floor in a sodden heap.