You are here: Products His Girlfriend’s Brother by Marc Alice 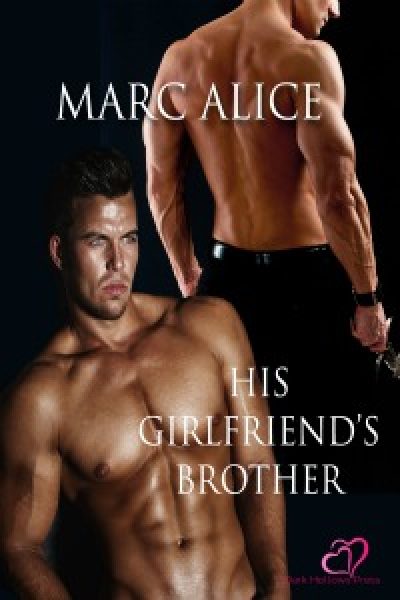 His Girlfriend’s Brother by Marc Alice

Gabe never meant to fall for his girlfriend’s egotistical Alpha male brother, but when his second-self materializes, Gabe has no other choice but to embrace his chosen mate. Soon, Gabe’s future is sealed by fate and blood.

Gideon Barshone is a bleeder mate for one of the most powerful supernatural creatures in the world. Destined to bleed and mate with more than one vampire, Gabe understands his purpose once he and Gideon form their bond, but Gideon’s little sister isn’t happy with the new arrangement. She reminds Gideon of one harrowing fact and Gabe’s obligation to the vampire race is destined to break her big brother’s heart.

Marc Alice set out on a writing journey ages ago and discovered creative freedom at Dark Hollows Press. Working on collaboration projects, Lucifer’s Lunatic and Sins of Wolves: The Safe Mountain series, Marc believes love exists at the root of goodness and evil. He enjoys writing stories where there are clear antagonists and protagonists, and finds it’s always enjoyable when the two work out their differences and reach satisfying, and sometimes intimate, conclusions

The idea of vampires being submissive to a partner has always intrigued me. In His Girlfriend’s Brother, Gideon is an Alpha male but when he mates with Gabe, he becomes somewhat submissive because he realizes he will need Gabe in order to survive.

Gideon Barshone—primal, sexy, handsome, mysterious, and tall enough to find in any crowd. A real asshole by practiced trade, Gideon was an Alpha male who undoubtedly enjoyed the spotlight and craved center stage in any and all situations and settings.
At the moment, Gabe was Gideon’s lone audience and he didn’t feel comforted by the fact.
Gideon was dangerous. That’s exactly what he was…a menacing immortal determined to live out his days as a royal pain in Gabe’s tail.
Given the obvious, it was unlikely Gideon would perish and become a decaying member of the graveyard society so Gabe was left with one choice—tolerance. Lately he was fresh out.
To add insult to injury, he hadn’t been able to avoid the too-frequent run-ins with the egotistical fellow. It was somewhat difficult to steer clear of Gideon since Gabe visited his home on a regular basis. Sooner, rather than later, his trips to the Barshone estate would cease but for now, he had to deal with the gatekeeper.
“Where’s your sister?” Gabe had long since lost the mastered art of pleasantries.
“Inside,” Gideon replied, never looking up from his book. “Anything I can help you with today, Mr. Chance?”
Drawn to the crystal blue sparkling pool, Gabe indulged in a disturbing fantasy. He pictured Gideon swimming laps, his muscular arms shooting out of the water like a powerful representation of supreme health and overall fitness. Gabe couldn’t pull himself away from the trickery, even when he recognized it as such.
As Gideon’s fingers pressed together and dug at the water’s surface, the splashing of feet and swooshing sounds of a swimmer’s body in freestyle motion made Gabe believe in deception in its finest forms, at least in the supernatural world. He had no idea how long he’d stood there, frozen in time, still in the present but drawn into another situation if not another place, but he couldn’t deny the physical ramifications of viewing such a façade.
He was rigid, hard as granite and thick as stone. The heavy bulge in his jeans, the solid press of his cock against his briefs, and the catch in his dry throat made for an uncomfortable situation especially since Gideon hadn’t moved muscle. Had he witnessed the shenanigans, perhaps even arranged the unwarranted delusions?
Gideon lowered his hardback. “I asked you a question.”
Gabe jerked and looked away from the pool. He was unable to return to the fantasy after Gideon interrupted him. There wasn’t anything left to see. The pool was empty. The waters remained calm.
“No, nothing you can do,” Gabe whispered, concerned by the recent vision.
“You don’t look so well, Gabe. Maybe you should lie down.” Gideon’s brown eyes were as rich and creamy as dark chocolate pudding but Gabe wasn’t easily fooled by the pretty boy who possessed them. A devious smile tilted Gideon’s red lips. “You’re breaking a sweat, my friend. Take a dip in the pool. It might help you clear your head, give you some perspective.” He smirked before he tossed on a pair of sunglasses. “If I can’t be of service, run on along and find my dear sister Julia. Perhaps she can help you with your little problem.” He tilted his head at Gabe’s obvious erection and returned to his reading. “Somebody needs to lend you a hand.”
In tremendous and sudden pain, Gabe acknowledged the unusual pulsating in the center of his chest. The odd burning sensation wasn’t like heartburn but more definite and invasive like a stake had been driven in his heart. He could’ve sworn he felt the stretching of muscles, the parting of flesh and arteries as a sharp and jagged instrument chiseled its way down the middle of his sternum.
Breathless then, he glared at Gideon, certain his girlfriend’s brother had inflicted unexplainable and agonizing pain upon him. Without question, he’d also inspired the pool fantasy. If Gabe’s second self had been receptive to the preposterous deception, then perhaps the illusion was a sign. Maybe it would soon turn into the perfect day for confessions, the kind of revelations destined to free a man, but devastate a woman.