You are here: Products His Audacious Bride by Bethany Hauck 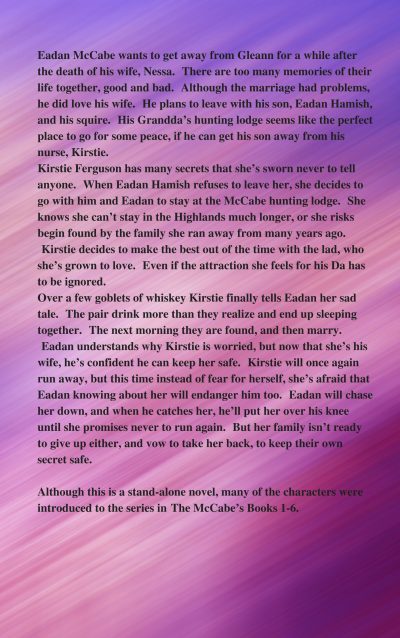 His Audacious Bride by Bethany Hauck

Eadan McCabe wants to get away from Gleann for a while after the death of his wife, Nessa. There are too many memories of their life together, good and bad. Although the marriage had problems, he did love his wife. He plans to leave with his son, Eadan Hamish, and his squire. His Grandda’s hunting lodge seems like the perfect place to go for some peace, if he can get his son away from his nurse, Kirstie.
Kirstie Ferguson has many secrets that she’s sworn never to tell anyone. When Eadan Hamish refuses to leave her, she decides to go with him and Eadan to stay at the McCabe hunting lodge. She knows she can’t stay in the Highlands much longer, or she risks begin found by the family she ran away from many years ago. Kirstie decides to make the best out of the time with the lad, who she’s grown to love. Even if the attraction she feels for his Da has to be ignored.
Over a few goblets of whiskey Kirstie finally tells Eadan her sad tale. The pair drink more than they realize and end up sleeping together. The next morning they are found, and then marry. Eadan understands why Kirstie is worried, but now that she’s his wife, he’s confident he can keep her safe. Kirstie will once again run away, but this time instead of fear for herself, she’s afraid that Eadan knowing about her will endanger him too. Eadan will chase her down, and when he catches her, he’ll put her over his knee until she promises never to run again. But her family isn’t ready to give up either, and vow to take her back, to keep their own secret safe.

Although this is a stand-alone novel, many of the characters were introduced to the series in The McCabe’s Books 1-7.