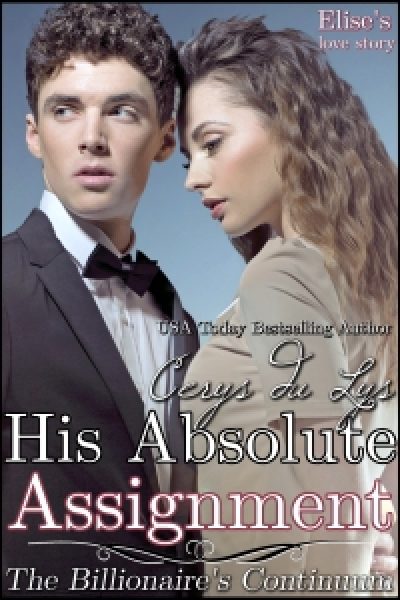 Six months ago I was trapped in a library with a man who wanted to possess me. For three days, a record-breaking blizzard kept me confined with Lucent Storme, the dominating and enigmatic Director of Public Relations for Landseer Enterprises. Rumors existed of his forbidden desires and darker passions, but I didn’t believe them. I should have. For one weekend, I became Lucent’s sole obsession.

When the snow began to melt, he tried to leave me. He thought he could save me from himself, from his control. I didn’t let him. I was already his.

Six months ago my entire life changed. I never meant to fall in love–especially not with Lucent–but his allure transcended common sense and tapped into a dark, primal need inside me that I didn’t know existed. The snow melted, our lives quieted, and everything seemed to be going perfectly.

I thought I knew Lucent, but I realize now I never really did. A mysterious calm exists even within the eye of the darkest storms. I love Lucent. I am his and he is mine. I want to believe he is a good man. After seeing another side of him, after being the object of his absolute obsession, I fear I might have fallen in love with a monster.

After marrying the dominant and reclusive Asher Landseer, billionaire CEO of Landseer Enterprises, Jessika thought she’d found love and happiness. With media slander surrounding her, and Landseer Enterprises suffering a severe security breach seemingly centered around her and Asher’s marriage, she begins to question whether they can truly have a future together. Can Jessika overcome her anxiety and self-doubt towards the turmoil that seems to follow her

“Up,” Lucent said, commanding me.
I stood. I’d been sitting at his desk in his office at Landseer Tower while he was away, which was probably not the most ideal place to situate myself. Lucent had a grand office with a view of the city; and, as well he should, considering he was a prominent figure at Landseer Enterprises. Lucent Storme, Director of Public Relations, figurehead for the public front of Landseer Enterprises. He attended press conferences, spoke about new and exciting deals, went to events, traveled, and overall he just did a lot of things. He did more than his title dictated, too, but that wasn’t for everyone to know. I probably shouldn’t know, either, but…
“Kneel,” he said, pointing to the carpeted floor in front of his feet.
“Lucent, I–”
He interrupted me with a sharp gesture. “Miss Tanner,” he said. “Kneel.”
I sighed and rolled my eyes at him, then knelt on the carpet in front of him. We stood (or he stood and I kneeled) behind his desk. The large window to the side gave me a wonderful vantage point of the city and I found myself glancing at the streets.
“You’re an extremely difficult woman,” Lucent said, demanding my attention once again. “You sneak into my office without my permission, use my desk for your own pleasure, and then you have the gall to act as if nothing is amiss. Have I missed anything?”
“I certainly didn’t use the desk for my own pleasure,” I said. “I was trying to get some work done.”
“I recognize that you have a mouth, Miss Tanner, but I don’t want you to use it at the moment.”
“You asked me a question!”
I didn’t get to say much more than that. Lucent grabbed my chin in his hand and lifted it up, making me look skywards and towards him. He lifted my head high, straining the muscles in my neck, then he squeezed my jaw slightly, forcing me to part my lips.
This was all cause for surprise, but then he surprised me more by kissing me. Bending low, Lucent descended upon me, bringing his mouth to mine and kissing me with such passion and fervor that I forgot nearly everything.

Be the first to review “His Absolute Assignment – Elise’s Love Story: The Billionaire’s Continuum by Cerys du Lys” Cancel reply