You are here: Products Highland Wolf Clan, Book 1, The Reluctant Alpha by A K Michaels 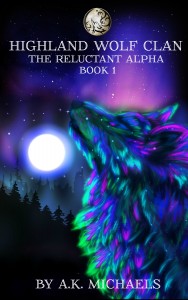 Cameron Sinclair is a successful businessman, with offices all over the world and a multi-billionaire with all the trappings. He is also a Wolf and he vows never to return to Pack life, or his birthright as Alpha.

He is ‘summoned’ back to his Highland Pack by his estranged father and things do not go smoothly, resulting in him leaving to help his Uncle in the USA with several of his friends in tow.

What awaits is heartache, sorrow and the chance for a new life as Alpha of a large Pack. A life with love in it. His first sight of the white She-Wolf affecting him in ways he can’t even understand.

First, he and his Wolves have to take on a deadly threat, the deadliest of all; a corrupt and depraved Alpha with a horde of guards as immoral as their leader.

Will he take his chance at love? Or do as he always does; walk away?

If you love your HOT Paranormal Romance, then this is for you! Book 1 in the Highland Wolf Clan series. Another hot paranormal romance by A K Michaels with over 100 5* Reviews!

“If you’re looking for an exciting and thrilling read in the paranormal genre, then this book is the one for you.

She now spends her time reading – everything from Sci Fi to Crime, Erotica to Fantasy, Thrillers to Paranormal Romance. She loves spending time with her family and, of course, writing! She has twitter, Facebook and a mailing list and loves chatting with her readers on social media.

I had the characters in my head for a while. I let them grow until I had to sit and type it out.

Be the first to review “Highland Wolf Clan, Book 1, The Reluctant Alpha by A K Michaels” Cancel reply