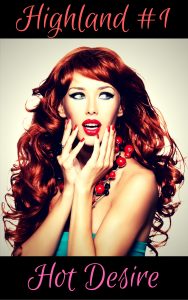 Greig is about to do something crazy and Liza will find out how crazy. It’s hard to say no to a tall rugged handsome man when he asks you out for coffee. Liza would soon discover, after taking a sip of said coffee and waking up in the backseat of a car going down the countryside, that situations can change unexpectedly. What is this Greig guy planning, would he let her go free? Liza wakes up again in a strange castle. She had a room prepared with just about anything she could need, he had been planning this out. It seems he also has a past with her father. Liza’s no stranger to men being tempted by her, but there is something different going on here. Wanton feelings and intrigue tend to pop up at unexpected times.

Stacey M. Young loves to read, listen to local music, and play with her two cats. She lives in Oregon with her husband . When she’s not enjoying the beauty of the natural world and the creative scenes of the cities, she writes stories that are sure to spice up anyone’s day.

Chapter One – Kidnapping
Greig sat in the drizzle, legs crossed, ankle over knee, as he contemplated the layoff notice in his hand. He had not been expecting it.
Not today anyway. That was not the plan.
He tilted his head up and let the Edinburgh rain wash over his face, considering his options. He could show up at the institute anyway; probably Gregory hadn’t had time to inform them that the translator they were expecting was no longer working with the firm.
On the other hand, what were the chances they hadn’t sent someone else to cover the job?
It was a conundrum for sure.
Greig stood abruptly, resolving to go to the Institute anyway and wing it. Even if they sent someone else, he had – Greig squinted at his watch – at least fifteen minutes to get there ahead of them.
He set off at a brisk clip toward the VARIE Institute, racing against the clock. He arrived with six minutes to spare and got through reception with no problem.
Now all he had to do was find the right room.
“Hello, excuse me; I’m looking for the Japanese delegation. Where would I find them?” he asked, stopping a random person in the corridor. She smiled at him, looking up at his 6’3” frame with appreciation, taking in his jet-black hair and deep green eyes and clearly appreciating the aesthetics. She leaned slightly toward him as she gave her answer and he smiled, nodded his head, and kept on moving. Any other time he might have given her the time of day but he was on a mission and time mattered.
He found the right door and peeked in to the conference room, currently filled with several Japanese people standing around in groups and conversing. In the front of the room were three people including an older matronly looking woman with short brown hair and stocky legs, dressed in such a stereotypical fashion. Next to her was a tall, thin, gangly man with a hooked nose who looked like he was unfamiliar with sunlight. The third person was slightly shorter than the tall man, with a full head of fiery red gold hair. Her emerald green eyes looked amused at something the gangly man was saying and she was twisting back and forth as if filled with nervous energy. She turned to look at him as he walked toward them and her eyes widened.
Greig arranged his face into the most charming and pleasant look he could manage.
“Hello. I do hope I’m not late,” he said.
“Oh? And you are?” the matronly woman asked, visibly perking up.
“I’m your translator. I believe you were expecting me?” he said turning the full force of his smile on her.
“Oh” she said, fat hands reaching for the pearls around her neck, “I see.”
“You’re the translator?” red gold hair asked lifting one perfectly coiffed titian eyebrow and watching him skeptically. His smile became more real as he looked at her. She really was a stunning woman.
Too bad her father was such a douche bag.
“Excuse me, Ms. Gregory?” he called, hurrying to walk beside her as she left the conference room. No other translator had shown up so he’d shrugged inwardly and stayed for the entire session. Now it was time to get down to business.
“Liza please. Ms. Gregory makes me feel like a grandmother.”
“Liza then. I’m Greig.”
“Yeah, I know.”
“So I was wondering if you might like to have a coffee with me.”
She stopped abruptly, turning to face him.
“I beg your pardon?”
“I said, would you like to have cof-“
“I heard what you said; I was just surprised that you said it.” Liza said interrupting him.
It was his turn to lift an eyebrow, “Why would you be surprised?”
“Well… for one thing, don’t you work for my dad?”
Not anymore,’ he thought.
“Is that a problem?” he asked.
She tilted her head and smiled consideringly at him, “I guess not?” she said.
“Wonderful. There’s a coffee shop not three doo-“
“I know that.”
She really needed to do something about the interrupting thing that she did.
“Excellent. Shall we?”
“Uh” she thought about it for a minute then shrugged, “I guess.”
‘Hey whoa, back up with that enthusiasm,’he thought.
“Excellent!” he said.
It was still drizzling outside so Greig was glad to step into the warm, toasty atmosphere of the café. Of course, Liza had an umbrella so she was less wet than he.
“I’m going to get our drinks at the counter. What will you have?” he asked as he motioned her into a seat.
“Café latte should do just fine. One sugar.” she said with a smile.
“Anything to eat?”
He fully expected her to look scandalized at the thought of her eating
“Yes, I think I’ll have a chocolate chip cookie if it’s fresh” she said. Greig barely stopped his mouth from dropping open before heading to the counter. He ordered their drinks and got a giant chocolate chip cookie for her. In addition to the sugar cube he added to her drink, he also slipped in a few drops of the liquid they’d given him. He’d paid a fortune for it so it had better work.
He turned around with the coffee, smile on his face, and went to sit down at their table.
“Here you go,” he said placing the large chocolate chip cookie down on her side with flourish. Those eyebrows rose again.
“You surely don’t expect me to finish all this on my own do you?” she asked.
He stared at her in consternation, “Uh…didn’t you ask me to order you one?” he asked.
She stared at him and then burst out laughing, “You should see your face.” She said taking a sip of her coffee.
Greig lost any ounce of guilt he might have felt about what he was going to do next.