You are here: Products HIGH TIDE by Maureen A. Miller 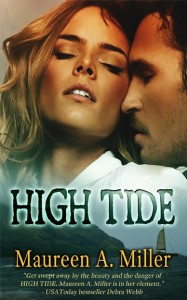 HIGH TIDE by Maureen A. Miller

U.S. Geological Survey expert, Nick McCord, cannot account for the strange phenomenon plaguing the Windward coast of Oahu. Breaking waves on a windless shore. Dead fish washing up on the sand. The only viable culprit for these anomalies is the new housing development, Manale Palms, and its attractive contractor, Briana Holt. Try as he might to find blame with Briana and her site, the truth remains a mystery.

Briana Holt portrays herself to the outside world as a woman in charge. In reality she is burdened with insecurities, and one of those insecurities is over six-feet tall. Intent on defending her property from Nick’s suspicions, she starts to dig deep into the peculiar episodes along the coast.

Nick and Briana’s mutual curiosity makes them allies, and their mutual attraction makes them lovers. Now, as they narrow in on the source of the mystery, they find themselves in a struggle to protect the coast…and their lives.

Irritated by the absurd whim to stake out a construction site that in effect locked down at dusk, Nick made one last sweep of the waterfront lots and focused on the patterns of the tide. Engrossed by the gentle ebb of the bay, he frowned at water which was traditionally docile, but now rippled in slow agitated rolls. Perhaps the untrained eye would not have noticed. Several native fishermen already had, however, and had brought their testimonies forward to his office in Honolulu.
Reaching the seawall, Nick critiqued the construction−an organized layer of rocks patched together with thickets of cement to avert the bay. He was so absorbed with his inspection he nearly missed the shadow suspended at the far end of the barrier.
The moon slid from behind a misty veil to reveal a siren with her arms stretched back, her body arched in offering to the sea.
Motionless, he was entranced by the outline of her body. It conjured up images of goddesses relayed to him by his grandfather. Avidly, he traced the curve of her chin down the soft arch of her throat to high breasts caressed by the wind. At length his eyes slipped down long, poised legs, until without thought, he whispered her name.
Briana’s head snapped. She teetered precariously and spun to identify the voice.
Taking a step closer, Nick heard her frustrated sigh.
“What are you doing here?” she whispered out of reverence to the peace of twilight.
For a second, he averted his gaze. “I expected to find your workers dumping into the ocean after all the crowds had gone home.”
Briana simply nodded and pivoted back towards the sea.
“No berating on your part?” he questioned.
“No,” she hesitated. “There was nothing for me to hide, and now there’s nothing for me to say.”
“Briana—”
Exasperated, she shot him a challenging look over her shoulder.
“Ms. Holt,” he continued with a droll smirk. “Just because I haven’t caught you, that doesn’t mean you’re innocent.”
“You know what, Mr. McCord?”
“Nick,” he grinned.
“You know that Manale Palms is not responsible for whatever it is you’re looking for. You’re just floundering because you have no clue what’s going on under that beautiful stretch of water.”
“How insightful.” Nick reached a hand up into his hair. “And how accurate.”
Seemingly intrigued by his despondency, Briana turned around, careful to maintain her balance. He sensed that she felt at an advantage staring down at him.
“Don’t take it so hard,” she allayed. “If I can help, if I see anything—”
“Briana!”
Startled by his outburst, Briana’s mouth dropped open. Fear pinched her features as a wave surged behind her knees with such a low but relentless force that she toppled forward. Nick caught her and nearly fell back himself. He struggled against the suction of the slick as it endeavored back to sea.
Retreating on hazardous terrain beneath the pooling stream, Nick hooked an arm beneath Briana’s legs. His other was clasped protectively around her back as he eyed the now placid bay with disbelief. Several more receding steps placed him on dry ground, where he sensed Briana’s erratic heartbeat against his own.
“Y—you can put me down now.”
Securing her close to his chest, he gazed down into anxious eyes, and felt short fearful breaths rake across her lips.
“No,” he whispered against her hair. “No, I can’t.”

Be the first to review “HIGH TIDE by Maureen A. Miller” Cancel reply